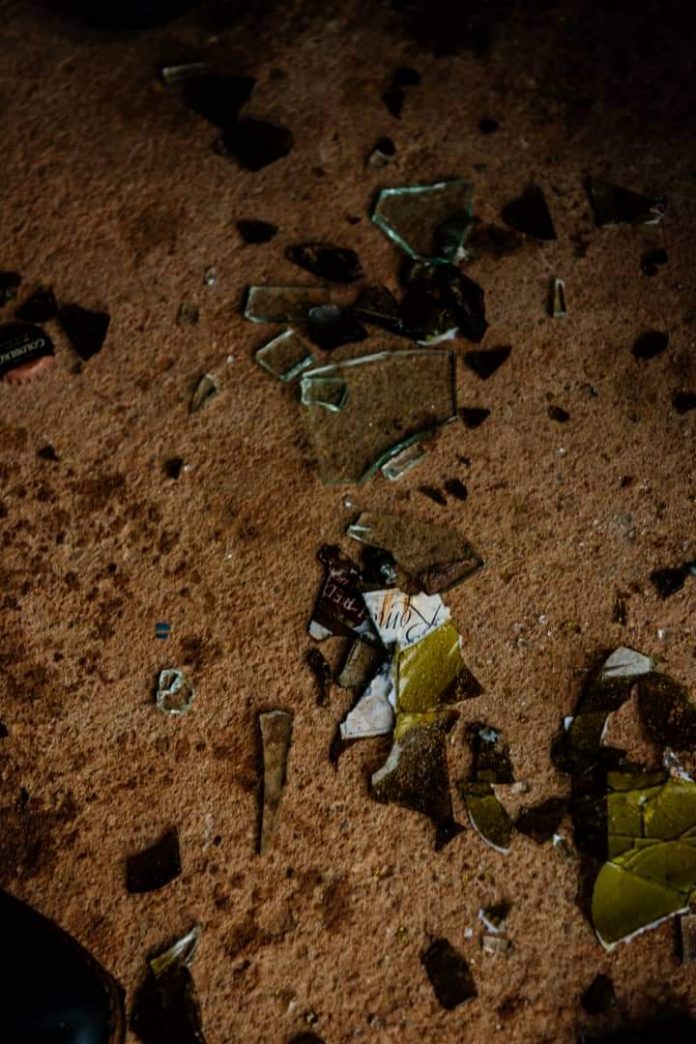 ▪︎ PDP, APC accuse each other of sponsoring thuggery

The Commissioner of Police in Ondo State, Mr Bolaji Salami and the Commandant of the Nigeria Security and Civil Defence Corps, Philip Ayuba, have visited Ijebu-Owo and Ipele in Owo local government area of Ondo State to assess the level of wanton destruction carried out by suspected political thugs.

Moving round Owo town, from Mobil in Ijebu-Owo to Aro street Junction down to Ipele town, the suspected political thugs destroyed over twenty vehicles and injured over ten persons who were initially receiving treatment at Ipele Hospital before they were transferred to the Federal Medical Center (FMC) Owo, due to complicated medical situations.

Mrs Nike Alale who said she recently returned from Norway narrated how she was attacked while buying fuel at Bovas Gas Station at Aro Junction in Owo.

She said: “We were buying fuel here and all of a sudden we heard gun shots. We had to run inside the fuel station office. We were watching them as they destroyed my vehicle.

“They were shouting ‘Eyi La fe’. They stole all the valuables in my car including my phones and car documents.

“They came down from a PDP campaign convoy. We saw them shouting kill them! Kill them! There is no APC sticker on my car. I am not an APC member. This is unfair.”

The Owo High Hope Club was not speared in the attack. 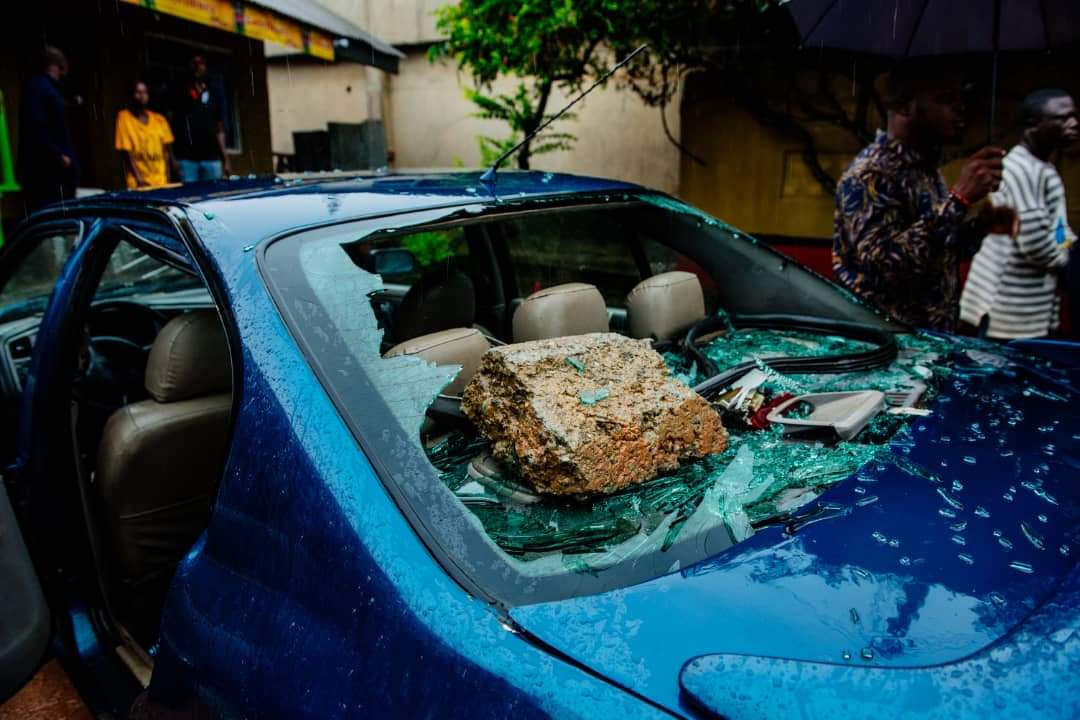 The leader of the club, Mr. Deji Ogunbodede said members of the club were drinking peacefully before the political thugs attacked.

He said: “We were drinking peacefully and suddenly we heard gunshots from the PDP campaign convoy. Some boys entered this place with guns. They wore PDP vests and caps. They aimed at us but we ran away.

“Look at bullets all over the floor. Our cars are destroyed. They packed our phones. Over 30 phones were packed away by the thugs. They broke my car and carted away all valuables inside including the photocopy of the car documents. They broke our fridge and took bottles of beer away.

“We were surprised. This club is not for APC. It belongs to Owo people. We see this attack as an attack on Owo town. It’s a taboo.

“People don’t bring war to Owo. The worse part was that they were shielded by the Police, Civil Defence and the Soldiers.”

The branch chairman of Ipele NURTW, Bukunmi Ojo, who is on the hospital bed said he was beaten thoroughly and stabbed severally by the PDP thugs in Jegede’s campaign convoy.

Ojo said Jegede lied on Channels Television yesterday when he referred to him as a member of the PDP.

He said: ”Jegede’s thugs attacked me. I am not a member of the PDP as claimed by Jegede on TV yesterday. Everyone in Ipele knows that I am an APC member.”

Afolabi Ibidapo narrated how the PDP stormed the APC secretariat at Ipele and descended on all party members holding their meetings peacefully.

Several vehicles and motorcycles belonging to APC members that were destroyed in Ipele were seen by the Security chiefs who were also in the town.

Other persons attacked and still on the hospital bed receiving medical attention are; Tunde Oke, Aladenika Bade and Abraham Steven.

Addressing Journalists, the Commissioner of Police, Mr Salami, flanked by the commandant of the NCDSC, Mr. Ayuba, said he had gone round and seen that many property were damaged, and scores of persons were injured.

While assuring that the perpetrators would be brought to book, the Police boss said investigation would commence to get to the root of the matter.

On the October 10 governorship election, he said: “I have always assured the people of Ondo state that security will be total and everybody will be allowed to vote for the party of their choice.”

He identified the shells of bullet recovered from the scene of the incident as that of Pistol, Ak 47 and pump action which he said were prohibited arms for civilians.

Meanwhile, The PDP National Campaign Council for Ondo Governorship Election, has condemned the repeated violent attacks by agents of Governor Rotimi
Akeredolu, against their candidate, Eyitayo Jegede, and innocent citizens of Ondo state, following the irreversible consensus by the Ondo people to vote in their candidate, come next Saturday.

The PDP campaign in a statement by the Chairman, Publicity Sub-Committee Kola Ologbondiyan said Governor Akeredolu and his APC should know
that their recourse to political terrorism, brigandage and banditry against Eyitayo Jegede and the Ondo people, such as witnessed in Owo and Ipele on Tuesday, cannot save them, as nobody had ever subdued the Ondo
people on any score.

“Governor Akeredolu and the APC ought to have known that declaring the Ondo people as enemy for life; unleashing their agents of violence against them and making attempts at the life of their preferred candidate, Eyitayo Jegede, cannot cow the people, but rather strengthen their collective resolve ahead of the election.

“We know that this resort to violence is a ploy by Governor Akeredolu and the APC to inject crisis, overheat the polity and create tension in the state with a view to truncate the electoral process and push for a state of emergency, having realized that they cannot stand in a free, fair and credible election.

“Already, the Ondo people are aware of the characters being used by Governor Akeredolu and the APC in this ignoble venture, including the self-confessed APC militia, Isaac Kekemeke and we caution them to desist from such or be ready to face the legitimate response of the people.

“Moreover, we know that Governor Akeredolu and the APC are having sleepless nights because of Eyitayo Jegede’s soaring rating and particularly the warm reception being accorded to him by leaders and groups across the state.

“This informed the deadly attack on our candidate in Oba Akoko, where he was received by the highly revered Oloba of Oba, Oba Nathaniel Adegoroye and now at Ipele, where leaders and citizens had pitched their tents with him ahead of the election,” PDP said.

The PDP campaign urged Governor Akeredolu to stop behaving like the biblical Saul, who, after his rejection, was consumed by envy and bitterness to seek the life of his preferred successor, David.

“Such desperation for office, despite being rejected, avails nothing except further rejection as being witnessed between Governor Akeredolu and Ondo people, including key members of the APC who are displeased with this recourse to violence,” PDP added.

The PDP campaign also called on President Muhammadu Buhari to counsel Governor Akeredolu to stop overheating the polity because of his desperation to
hold on to office.

They also called on the Inspector General of Police to immediately pull in characters like Kekemeke and other agents of violence being used by the APC to unleash mayhem on the people.

“Governor Akeredolu should also advise himself and come to terms with the fact that the people of Ondo state have made up their minds to replace him with Eyitayo Jegede and no amount of violence can change that resolve,” PDP said.

PROCEEDINGS OF THE NIGERIAN SENATE OF THURSDAY, 15TH JULY, 2021

#EndSARS AND THE POWER OF TRUTH (2), By Martins Oloja