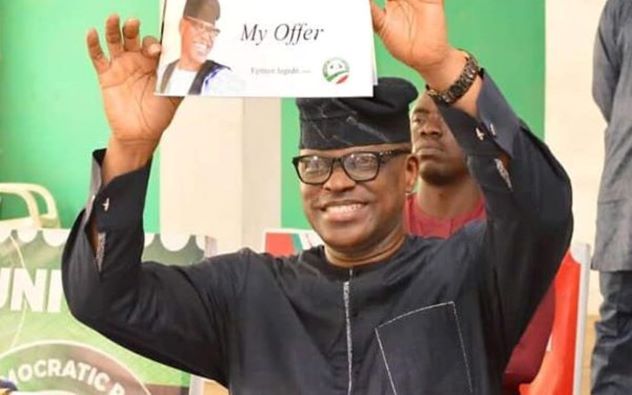 The governorship candidate of the People’s Democratic Party (PDP) in Ondo State, Barr. Eyitayo Jegede is currently under pressure to pick Deputy Governor of the state, Agboola Ajayi, as his running mate, party sources have said.

Ajayi, who dumped the ruling All Progressives Congress (PDP) for the PDP last month, was the first runner up at the PDP primary by polling 657 votes, while Jegede polled 888 votes.

Sources said Jegede is yet to open talks with Ajayi but some PDP chieftains have been pressuring him since last night to pick Ajayi due to the ability to gather such votes within one month of joining the party.

The source said Jegede is putting off the pressure on grounds that he needed a running mate he could trust.

According to the source, “Some PDP national leaders including a governor from the North West have been talking to Eyitayo Jegede on the need to pick Agboola Ajayi as his running mate.

“They emphasized on the point that the National leadership of the party does not want a situation whereby Ajayi, who defected as a sitting Deputy Governor feels neglected after the primary

“They also stressed that apart from the fact that Ajayi is a grass root mobilisers, Jegede needs a running mate that can match whoever picked by the APC as Akeredolu’s running from the southern senatorial district.

“But my oga told them that it would be difficult for him to accept their offer because he does not want someone who would be working behind to oust him from office if he eventually becomes a governor.

“Jegede also told them that he is ready to concede the PDP southern senatorial ticket to Agboola in 2023 general election if he is ready to work for the victory of PDP in the October 10, 2020 governorship election in the state,” the source said

According to him, a five-man reconciliation committee is to be set up by the PDP NWC with a view to holding discussions with the duo of Jegede and Ajayi in the next one week to harmonise interests before the issue of a running mate will be laid to rest.

After all, Obaseki and Shaibu also cry!

Kwara Govt approves use of hijab in state-owned, grant-aided schools

I am still traumatised over catching my wife in bed with...

Step down your ambition, 2023 presidency belongs to Southern Nigeria, Kassim...