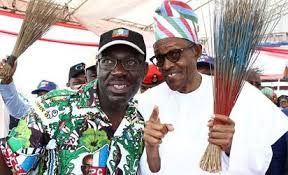 Fourteen members-elect of the Edo state House of Assembly have asked President Muhammadu Buhari to fulfil his promise of resolving the legislative impasse in the state, saying the time to act is now as the state Governor, Mr Godwin Obaseki has crossed the red line and now a threat to democracy.

The assembly members who are opposed to the governor’s inauguration of 10 out of the 24-member legislature said Mr Obaseki cannot continue to carry work against the party and the symbol of democracy, the legislature, without being sanctioned.

Spokesman of the group, Hon. Washington Osa Osifo, representing Uhunmwode State Constituency said it was time the president rein in the governor.

“We want to thank the President for the job he is doing for Nigerians. One thing that counts well for him as a man of integrity is that he has the courage to fight corruption.

“Corruption comes in many ways because when you brazenly stand on the head of democracy, that is the greatest form of corruption because it opens the window for people to do the wrong thing, just as it is in Edo where funds are wrongly deployed to fighting a cause that is needless just to realize a second term ambition.

“We want to call on him and also to remind him that this party promised change to the people. We came on the mantra of change and so in all that we do, we must have the consciousness that people are watching.

“How can it be said that an APC state is embarrassing the nation like this? It is not the intention of Mr President to run a government like this.

“Mr President we call on you to remember that you sent a message to the Edo parliament, yet to be inaugurated when our brothers in Bauchi visited you some months ago, you told them that the reason why they were inaugurated was to defend the laws and Constitution of the Federal Republic of Nigeria.

“That to subscribe to illegality would be a very wrong thing to do and through them you sent us a message that they should be men of honour.

“You sent another message to us that immediately your cabinet is inaugurated, the first assignment for your Attorney General and Minister of Justice will be to look at the situation in Bauchi and Edo States with a view to resolving them. In your words, you said ‘I will summon the IGP to see to it that these wrongs are made right.

“The issue is that this madness in Edo must be corrected”.

“Obaseki, the governor of Edo state has done manifest injustice to democracy. Obaseki has orchestrated something that is bringing actions that are alien to the people. We can imagine how the whole nation sees Edo.

“Today, everyone sees Edo state through the eyes of its head as if that is who we are. We are sorry, we apologise because that is not who we are.

“They have done manifest injustice and untold harm on members of the APC, the same party that we all belong to. By the instruction of Mr Governor, he has given such mandate to the 18 local government Chairmen to do bodily harm to anyone who has opposing views towards his ambition.

“What is the definition of anarchy? If you need that definition, just go to Edo state as it is today and you will not need a further definition. That is anarchy in practice.

“For us, on behalf of the Edo people, we can summarize it this way, that Obaseki is guilty of maladministration as a Governor, insubordination as a party member”, they added.

The lawmakers reminded the National Assembly of its resolution asking the governor to issue a proclamation for the inauguration of the Assembly, saying if they abdicate their rights, nothing will go right in this country.

“As for the National Assembly NASS, we want to commend them and also urge them to do what is right because they are the first in the lawmaking body and perhaps the tallest in governance.

“Therefore, if they abdicate their rights, nothing will go well in this country. Gov. Obaseki and his aides boasted that nothing will come out of the National Assembly investigation and now we are thinking, is that boast coming to fruition?

“We have our doubts because we believe in the National Assembly that they are men and women of integrity and our prayer for them is that may their words never come to nullity because it is better not to make any judgment than to make one that will be rendered useless or not be obeyed.

“As for the NWC of our great party, we want to thank them and pledge our loyalty to them and that we are grateful for the tickets they gave go us to run. There is no independent candidature.

“It can also be delayed, yes. But when it is delayed for too long, it becomes manifest injustice. We want to call on them to look at the laws and the Constitution that regulate the activities of the party and where they need to use it, let them have the courage to use it”.

Over 112 killed in Kaduna and Plateau in a month- Amnesty...