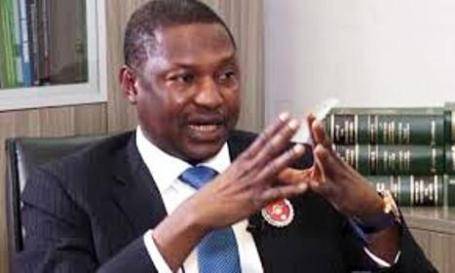 Abubakar Malami, the Attorney General and Minister of Justice, said on Sunday, March 1  2020, that the Federal Government would not falter in its determination to recover all stolen funds stashed abroad by individuals and corporate entities.

Malami gave  the assurance in Birnin Kebbi while speaking at the maiden Law Week of National Union of Kebbi State Law Students.

He said that the federal government had partnered necessary jurisdictions to recover the nation’s wealth stolen and hidden away in many countries.

Malami who spoke on “Attaining a National Breakthrough Through Successful Anti- Corruption War in Nigeria: The Issues, The Way Forward,” explained that President Muhammadu Buhari would not relent in his war against corruption.

“On the international front, the Nigerian government is collaborating with various jurisdictions to recover and repatriate funds that have been stolen and stashed outside Nigeria.

“The government is not relenting in the pursuit of recovery of Nigeria’s stolen wealth, the recovery efforts are ongoing and work is in progress.

“Government of the Federal Republic of Nigeria under the leadership of President Muhammadu Buhari will leave no stone unturned to recover wealth stolen from Nigeria either by individuals or corporate entities,” he said.

Malami said that the present administration had been fighting  corruption in all its manifestations.

“This fight includes legislative framework, institutional infrastructure and the adoption of effective preventive measures against corruption by putting in place mechanism for management of recovered stolen assets,” the minister said.

In his remarks, Gov. Atiku Bagudu of Kebbi appreciated the efforts of the federal government in fighting corruption,  but urged stakeholders including law students to embrace prevention instead of focusing on the punishment.

Bagudu who spoke on taking the Almajiri children off the  streets, said the state government would send a bill to the House of Assembly, to provide punishment for parents who allowed their children to roam the streets.

“We are going to legalise custodian of every child in the state, this will enable us to make parents and guardians accountable to every child,” the governor said.

Earlier, a retired Justice of the Supreme Court, Usman Muhammad, advised the law students to pay vigorous attention to Sharia Law in the course of their  studies, stressing that they would not be lawyers if they did not master it.

Diri: I did not know I would be governor of Bayelsa...