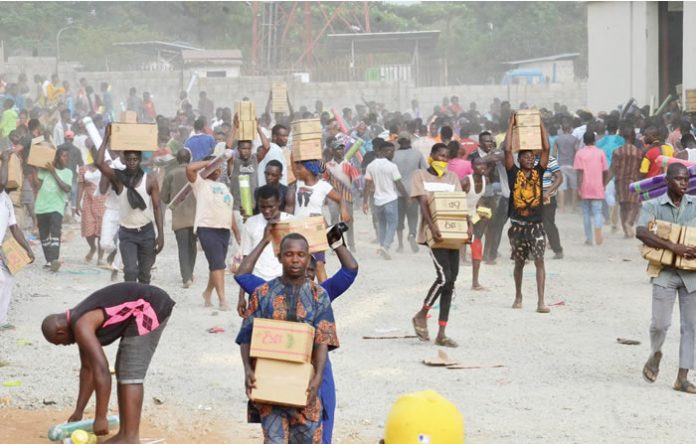 Published in PENPOINT Column of Daily Trust on Sunday November 1, 2020

Last weekend this author was privileged to witness the commissioning of a skills acquisition centre in   Buguma City, headquarters of Asari Toru Local Government Area (ASALGA) in Rivers State. The project   was developed by the member representing the community in the Rivers State House of Assembly Tekena Wellington, as a constituency project. Featuring a beautiful edifice that houses skill development activities, the project offers a remarkable aesthetic enhancement to the otherwise staid ambience of the undying pride of Kalabari land, the 82-year old Kalabari National College (KNC or more poetically KANACOL). At the ceremony, Wellington disclosed that his motive for the project was to reverse the (false but nevertheless trending) narrative which profiles the Rivers State youth as being qualified and disposed only for hire as thugs and militants. Seemingly innocuous, the modest setting of the circumstances of Wellington’s expression, avails it a significance which commands merit beyond the precincts of the location of the project.

For this author and many others, Wellington’s expression conjures a throw-back to the enterprise of US Astronaut Neil Armstrong, who on taking his very first step on the moon on July 20 1969, and as the first human to achieve the feat, referred to his effort as “That’s one small step for man, one giant leap for mankind”. In a comparative context, the Buguma facility – if endowed with good management, conjures similar expectation as Armstrong’s 1969 enterprise – as a beacon signposting a future flourish of skills and enterprise among Rivers State youth.

As the lull in the wave of street rage which recently swept across the country settles, there is a growing evidence-based consensus that Nigeria as a nation, has been running on a self-destruct mode as propelled by a complement of incongruities that spell no good for any society. The most topical among these is the regime of mistrust between the elements of the political class and the people they represent. This state of affairs was spawned and perpetuated by generations of leaders who routinely directed the national conversation to focus less on generative choices and more on degenerative ones. Illustratively, just as the popular marketing zinger by Toyota Motors goes that “good thinking good product”, so “bad thinking also goes with bad product”, (or in Nigerian parlance ‘bad market’).

Historical evidence traces the syndrome as one of the sad relics of the colonial era. Colonial officers were mind-programmed to ride rough shod on the colonised Nigerians, and indeed Africans through aggrandizing themselves, with lavish perks of office in colonial service. At their replacement with newly emerging Nigerian elite, the latter were inclined to retain that dichotomy between the colonial faces and the Africans by substituting themselves for the former, including claiming the perks of office of the colonialists. With the exit of the colonial officers the incoming Nigerian elite determined to retain the airs and lavish perquisites of office enjoyed by the former, even to the detriment of their own kith and kin. Thus ensued the very seeds of the present destructive stratification of the Nigerian society along lines of varying economic and political endowments, and the evolution of a parasitic leadership class preying on the pauperized, host masses.

With the perpetuation of the syndrome of the few living off the sweat and blood of the majority, without guaranteeing the progress of the latter, the ensuing social contradictions have crystalised to lead to the country’s future survival under one flag and anthem, to now depend on the emergence of new narratives and inevitable changes in the way governance runs within it. If nothing else, evidence from the ongoing process of post mortem to evaluate the losses which the country suffered in terms of lives and property with respect to the wave of protests across the country, point to the fatalistic reality that it was only a matter of time before the country arrived at the point of mutually assured destruction of its contending forces and values.

The question now borders on how far it can go in redeeming itself and moving to the proverbial next level? The answer to this question is not far-fetched and has been raised in several fora. It borders wholly and solely on reversing the abysmal collapse and failure of governance and adopting the ways and means of promoting good governance where all Nigerian lives matter. The issue at stake therefore goes beyond seeking an already established answer, but rests on the fear that the status quo may dither to eat the humble pie of regret and reverse itself, pursuant to avoiding a progression towards failure in responding adequately to the rage in the streets. This fear is also hinged on the multi-faceted context of the circumstances which determine the dynamics that propel social change in a developing country as Nigeria.

As has been stated severally in this column, the country’s socio-political circumstances are not determined solely by any single leader – be such the Head of State or any other person.  If the foregoing were otherwise the country’s long history of military rule which featured a long list of dictatorial military leaders with different styles of leadership, would have worked the miracle of transforming Nigeria into an Eldorado. After all it was due to the abysmal failure of military rule that the present democratic dispensation came to be, with its now missing core feature expected to be the joint ownership of governance by the Nigerian people. This expectation has so far proved to be a mirage to the wider cross-section of Nigerians, who incidentally are the youthful members of the citizenry, and are the ones that are caught up in the vicious vortex of the street rage.

Perhaps to hazard a paraphrase of the takeaways from the last roll-out of anomie nationwide, here are some considerations of interests. Firstly, is that rule of law and governance at all tiers virtually collapsed as the Constitution was thrown to the dogs. Incumbents to public office now see their positions as opportunities to aggrandize themselves and pillage public largesse, instead of serving the public as the law provides. The inevitable consequence is the loss of confidence by the general public in the institutions and processes of governance. Incidentally the street protesters were not the first to protest the incongruity associated with the political power management dynamics in the country. Even the several extreme social tendencies in the country including the murderous outrages by Boko Haram insurgents and IPOB, attest to the fact that all is not well with governance in the country.  It is in the context of their respective grievances that each aggrieved group now hits back at the country, within the ambit and virulence of its nuisance value. For Boko Haram and other insurgents, it is armed struggle against the Federal government.  For the #EndSARS protesters, it is street level anomie.

Another takeaway from the protests is the disturbing reality of unpardonable sluggishness in the processes of government as played out in its tardy response to the superlative successes of the organisers of the protests. Who, ever trusted a flat footed government? Yet another area of concern is the routine diversion of public projects and programmes to private interests. This syndrome completes the troika of decadent tendencies in government which acting together fuelled its disconnect with the masses and led to the anomic tendency – the recent street protests.

While the first sin of successive governments in Nigeria is the soulless detachment from the people and the second remains the incontinence of operations and processes, the third one denies the people from even the little largesse that trickles to within their reach. This is where the Buguma skills acquisition project – joins other similar ventures across the nation, to serves as a nugget of hope to a beleaguered citizenry. In the apparent failure of other constituency projects in the vicinity, Wellington’s scheme cannot but enjoy an iconic status.

Meanwhile going back to the national scene, prospects for change can only be considered if the foregoing troika of weaknesses can be resolved. Many Nigerians are not in the affirmative over this contention, as they believe the country was not wired ab initio for dramatic changes in the status quo.  However whether the present administration of President Muhamadu Buhari will on its own volition restructure its operational modalities, or wait to be prodded to act towards fostering change by subsequent waves of protests, is a dispensation hanging in the air.

Could Tough Govt Action Against #EndSARS Protesters Be Govt Terrorism Against...

We will resist any planned protest in Lagos-Police

Conflict early warning and peacebuilding: The path to sustainable peace in...