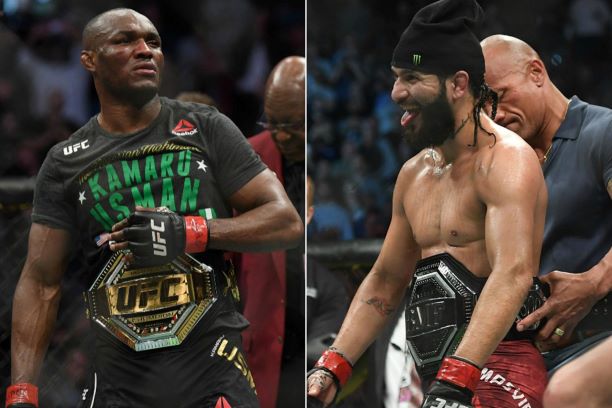 It was billed as a potential real life Rocky Balboa story, but Kamaru Usman left fans and pundits with little doubt as to who is at the summit of the welterweight division after a resounding display over Jorge Masvidal to retain his crown title at UFC 251.

Despite the trash talk and division among fans as to who would emerge victorious, Usman put in a dominant performance, demonstrating his wrestling and grappling prowess over fan-favourite Masvidal.

The challenger, coming into the fight on just six days’ notice, enjoyed a fast start in the opening round at Yas Island – otherwise known as Fight Island – displaying the electric pace and dangerous striking threat that has felled Darren Till, Ben Askren and Nate

Usman looked to get the challenger to the floor from the outset, taking Masvidal to the canvas in the opening minutes of the welterweight clash after catching a leg kick. But Gamebred rode out the danger and enjoyed success, landing strikes from the bottom.

However, the 33-year-old champion, who had the advantage of a full training camp, used his superior conditioning to his advantage, wearing Masvidal down with elite grappling against the cage, combining shoulder strikes and foot stamps to frustrate Gamebred.

Round four was more of the same for Usman, who was able to wrestle and control Masvidal with relative ease, despite the challenger’s best efforts in looking to evade his rival with elbow strikes in the clinch.

The final round saw Usman look for a decisive finish, and at one point looked to have secured mount position. But Masvidal exploded away and was back up to his feet for the final 25 seconds of the fight in which he threw the kitchen sink at Usman but was unable to land that all-important knockout blow.

The judges scorecards returned a comprehensive verdict, with two awarding all five rounds in Usman’s favour, while one gave it 49-46 to the champion.

It wasn’t the spectacle that most were expecting, but it was a statement performance by Usman to the rest of the division, as the Nigerian Nightmare equaled Georges St. Pierre’s record of 12 straight wins at welterweight. Bouts against Gilbert Burns and Britain’s Leon Edwards are on the horizon for the champion.

‘Gamebred is the biggest, baddest dude out there right now, so i had to switch gears preparing for him on six days notice. All these guys are preparing for one guy and that’s me, at the top of the mountain.

‘I trained for Gilbert, i had a different game plan. Gamebred is tough, he landed some elbows from the bottom and he didn’t quit.

‘I knew Jorge is tough, I’ve always said it minus all the trash talking and all the things going on, Jorge is a tough guy and I give him credit for that. I’m just levels better. I have more tools in the toolbox and when I need to I can pull them out and use them.’

Despite falling short at the final hurdle, Masvidal has done his reputation no harm, having put to one side his dispute with the UFC to save the headline act. A rematch with Nate Diaz seems the likely next move for the fan-favourite, who is eyeing an opportunity to have another shot at Usman’s thrown.

‘Let me get a couple wins and we’ll run it back,’ Masvidal told Usman as Bruce Buffer delivered the judges’ scores.

UFC 251 was the promotion’s most ambitious event in years, with president Dana White determined to see a major event held at the mysterious ‘Fight Island’.

Usman’s bout with Masvidal was one of three title bouts on the card, with Max Holloway running back his featherweight title defeat to Alex Volkanovski while Jose Aldo took on Petr Yan for the bantamweight title, vacated by Henry Cejudo.

Former rugby player Volkanovski earned yet another closely-fought victory over his featherweight rival, winning the contest 48-47, 48-47, 47-48 to the surprise of plenty of fans watching on.

Meanwhile, Petr Yan was able to withstand one of Jose Aldo’s best performances in recent years to finish the veteran Brazilian in the final round to be crowned king of the bantamweights.

Popular flyweight Paige VanZant was defeated by Amanda Ribas in the opening round of her contest, falling to an armbar after an 18-month lay off.

Impeachment: Biden reminds Senate of “other urgent business” of state

FG to lift ban as Twitter agrees to set up office...

Police counsel says shooting of a petitioner by SARS was legal

Chelsea run riot against Southampton as Arsenal fall to Brighton