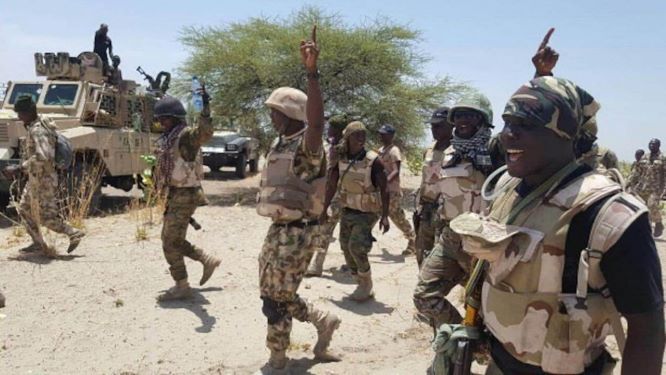 The insurgents exchanged gunshots with the military as they tried to capture the capital town.

They were said to have even launched explosives at the northern entrance of Damaturu where they engaged the military.

According to some residents of Zannah Zakariya Housing Estate, who spoke to our Correspondent on phone on Sunday evening, they started hearing heavy gunshots just after Magrib prayer (7.30pm) at the entrance of Damaturu near Yobe state Police headquarters.

“Our men engaged the Boko Haram Terrorists in a heavy gun battle this evening (Sunday) along Babbangida road while on their way to Damaturu,” Lt. Oteh said.

He assured residents of Damaturu of the readiness of the Nigerian Army to protect lives and property of the people. Oteh called on the residents to stay calm and continue with their normal businesses.

The ConclaveNg established that the insurgents had earlier sent fears into the hearts of residents of Babbangida, the headquarters of Tarmuwa local government area, about 50 kilometres from the state capital, Damaturu.

The insurgents were believed to have moved from around Damasak, a Borno town, the headquarters of Mobbar local government area, and transited through Mafa, which shares border with Babbangida on the eastern axis.

Sources said the people of Babbangida, on sighting them, ran into the bushes.

Oteh said the terrorists just transited through Babbangida and did not launch any attack on the town.

As of the time of this report, Nigerian Air Force (NAF) air craft was heard hovering over Damaturu.

FCT minister warns against putting up structures without approvals

Just In: Crack in Obaseki’s camp as Chief of Staff resigns