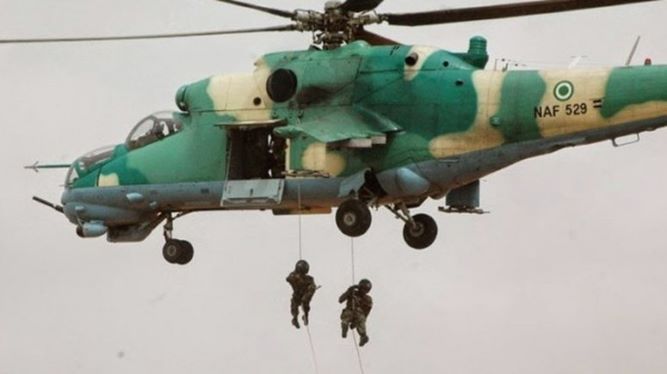 Air Task Force (ATF) of Operation LAFIYA DOLE has destroyed an Islamic State of West Africa Province (ISWAP) hideout and neutralized some of its fighters at Mina along the Gulumba Gana-Kumshe Axis in the Northern part of Borno State.

Confirming the report, Director of Public Relations and Information Nigerian Air Force, Air Commodore Ibikunle Daramola, said the mission, which was executed on 4 March 2020 as part of the ongoing Operation DECISIVE EDGE, was undertaken after a Nigerian Air Force (NAF) Intelligence Surveillance and Reconnaissance (ISR) aircraft spotted the terrorist assembling in the vicinity of some compounds within the settlement.

Daramola said the fighter jets scrambled by the ATF to engage the location scored accurate hits in the target area leading to the destruction of some terrorists’ structures as well as the neutralization of some of their fighters.

He said the Nigerian Air Force in furtherance of the objective of restoring peace and security in the Northeast and operating in concert with surface forces, would continue to carry out air interdiction missions against the enemies of the Nation.

Nigeria, WHO to parter on Non-Communicable Diseases, Tuberculosis

I abandoned my vile wife because she starves me of sex,...

Buni condoles with Borno on death of Emir