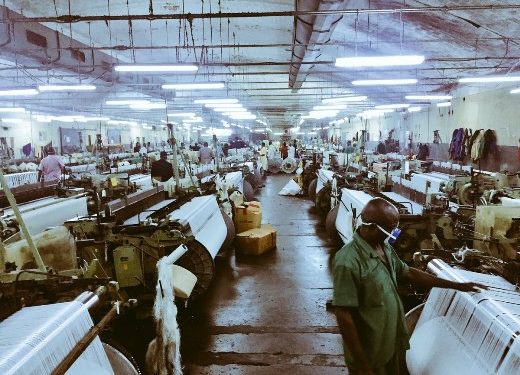 Textle mill
The Nigerian Textile Manufacturers Association (NTMA) has said the country spends $4 billion annually to import textiles and readymade cloths.
The Director-General of the Association, Mr Hamma Kwajaffa, said on Wednesday in Abuja that most of the imported textiles could be found at Kantin and Kwari in Kano and Balogun and Oshodi in Lagos.

In a statement, he said: “Influx of smuggled goods continues to flood major textile markets in Lagos and Kano states; textile importation do not only undermine the local Industry but steal our jobs.’’

“It deprives government of revenue; it is a drain on Nigeria’s precarious foreign exchange reserves,” he said.

He said that Nigeria had the potential to produce for the local market and to export to the ECOWAS market of 175 million people.

He said that Nigeria also have the potential to produce for the United States under AGOA and EU GSP scheme which Kenya, Ethiopia, Lesotho, Madagascar and a numbers of African countries are already exploiting.

Kwajaffa said that textiles used to be Nigeria’s foremost industry, being the second largest Employer after government and utilizing indigenous raw materials such as cotton.

However, he said that despite government’s intention to revive the sector, the reality on ground continues to be worrisome.

“The prevailing unprecedented harsh environment has dealt serious on the already fragile industry. “Unless government takes urgent steps to address key issues raised by the industry, the ray of hope that had arisen from the recent government Initiatives may get extinguished.

“Other developing countries are helping their textile industry in many ways due to its high employment potential.

According to him, India, which is the second largest textile producer in the world after China, recently announced 1 bn dollars incentive package for the textile and apparel industry to create 10 million jobs in three years.

“We commend the interest shown by the government in reviving the Nigerian textile industry in the past 6 months.’’

He said the industry has listed eight specific issues to the notice of government to intervene within the ambit of existing policy framework whereas some require new initiatives.

“ Re-scheduling of the CTG loan facility by the Bank of Industry to 10+2 years was agreed by the government and for this to be effective, a notification is still awaited.’’

He called on government to review the tariff on gas supplied to the industry in Naira to make it affordable.

He said that scarcity of black oil has crippled the operations of the textile mills in the North, adding that there is need to ensure availability of the oil to the textile mills through direct allocation from Kaduna and other refineries.

He also called for consistent supply of certified seeds to ensure adequate supply of cotton to local textile industry.

Under the dual exchange rate policy being currently pursued by the industry, the director general called on CBN to allocate forex at official rate for the industry to import of essential raw materials by the textile mills.

He charged the government to persuade its MDA’s to source all their uniforms from the local textile mills.

He also called on government to checking the influx of smuggled goods and action against counterfeit textiles which fake the Nigerian trade marks in an effective manner.

According to Mr. Jaiyeola Olarewaju, the former Director General of NTMA, said the benefits from a competitive textile industry in Nigeria are numerous.

Olarewaju said that greater demand for cotton would boost the income of Nigerian farmers.

“Government needs to walk the talk and fulfill the assurances given to the sector.’’

Federer becomes oldest man in Wimbledon third round for 46 years