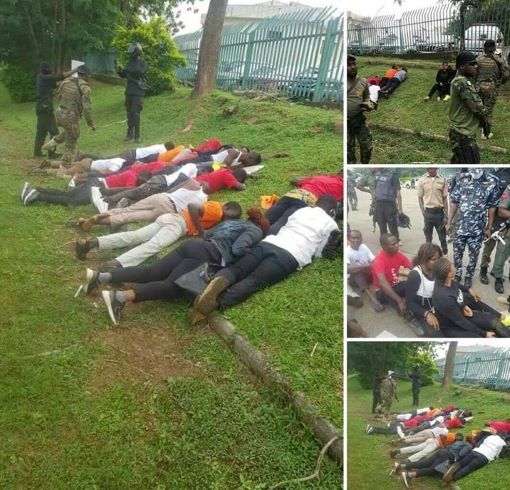 Socio-Economic Rights and Accountability Project (SERAP) has strongly condemned “reported violent attacks on #RevolutionNow protesters in Abuja, Osogbo and other parts of the country.”

SERAP said that the government of President Muhammadu Buhari must end the use of excessive force against protesters, and allow people to peacefully exercise their human rights.

Several protesters were also arrested by the police and the Nigerian Army in the Abuja metropolis.

In a statement today by SERAP deputy director, Kolawole Oluwadare, the organization said: “By failing to adequately protect protesters from violent attacks, Nigerian authorities have blatantly violated their obligations under the Nigerian Constitution of 1999 (as amended), the International Covenant on Civil and Political Rights and the African Charter on Human and Peoples’ Rights to which Nigeria is a state party.

“Nobody should be arrested or subjected to torture and ill-treatment simply for taking part in peaceful protests. The authorities should stop criminalising peaceful protesters.

“Rather than suppressing peaceful protests, the authorities ought to protect peaceful protesters and ensure a safe and enabling environment for people to exercise their constitutionally and internationally guaranteed rights to freedom of expression and peaceful assembly.

“SERAP urges the authorities to immediately and unconditionally release all those arrested, promptly investigate attacks on protesters, and identify security agents suspected to be responsible and bring them to justice.

“SERAP urges the international community including the UN Human Rights Council, the Office of the High Commissioner for Human Rights, the African Union and the African Commission on Human and Peoples’ Rights to publicly condemn attacks on peaceful protests and to put pressure on the Nigerian authorities to effectively investigate attacks on protesters, prosecute perpetrators and to respect and protect the human rights of everyone.

“Nigerian constitution and human rights treaties to which Nigeria is a state party guarantee the rights to liberty and security of person, freedom from arbitrary detention, freedom of expression, and the right of peaceful assembly.

“The UN Basic Principles on the Use of Force and Firearms by Law Enforcement Officials prohibit the use of excessive force against peaceful protesters.”

Lawan urges Nigerians to pray for Nigeria to overcome challenges