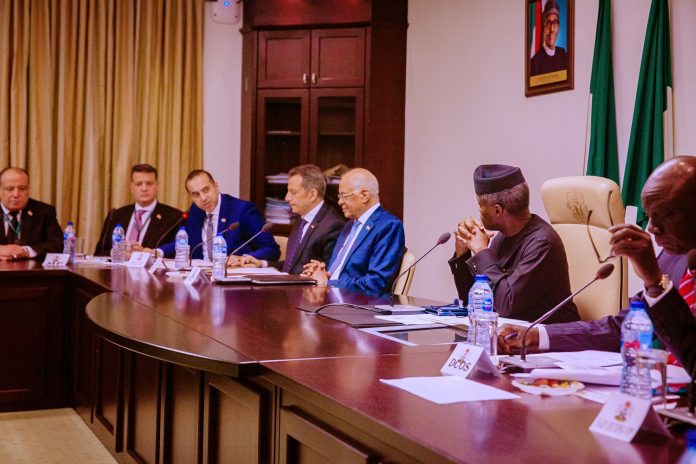 Osinbajo made this call when he received a delegation of members of Egypt’s Parliament (House of Representatives), led by its Honourable Speaker, Dr. Ali Abdel-Aal Sayed Hamad. The delegation also included the Egyptian Ambassador to Nigeria, Assem Hanafy Elseify.

Similarly, speaking on behalf of the government of Egypt, Hamad said Egypt shared the same view as Nigeria that concerted efforts was needed to combat terrorism in the Sahel region.

Osinbajo, who welcomed the delegation on behalf of President Muhammadu Buhari, noted that Egypt and Nigeria have enjoyed very good relations over the years.

“Since Nigeria’s independence in 1960, we’ve always had friendly relations and cooperation with the Republic of Egypt. We know that this very friendly and brotherly relations will continue.”

On the issue of security challenges on the continent, the Vice President urged for more concerted global action to prevent similar escalating situations in some parts of the Middle East as related to ISIS.

He said, “We would want to urge that Egypt joins us in calling upon the world, the international community, to immediately see the need for a concerted action against Boko Haram, Islamic State’s West Africa Province (ISWAP), and terrorist groups operating in the Sahel, in particular.

“We think that it is time for that kind of concerted action in the Sahel. And with such concerted action, we believe that we can prevent a situation as seen in some parts of the Middle East where damage to lives and livelihoods was done by ISIS.

The Vice President added that the world should not look away and hope that the problem would disappear, unless world powers come together to tackle it.

“Just as was done in Iraq, where the world powers came together to drive out ISIS, that is the sort of cooperation that we should have now to ensure that we’re able to deal with terrorism, especially terrorism in the Sahel,” he said.

Prof. Osinbajo also stated that Nigeria would continue to join hands with Egypt in promoting religious tolerance and tackling extreme poverty and challenges to social inclusion.

The Vice President further said Nigeria is open to Egypt for more investments, especially in the agri-business, agro-allied value chain, and also in light manufacturing and other such areas; just as he equally noted that Nigerian companies, particularly in the financial sector and industrial investments, are willing to do business in Egypt if given the opportunity.

In the same vein, the Egyptian Parliament speaker delivered a personal message from President Abdel Fattah al-Sisi to President Buhari and the VP, inviting him for the Africa Investment forum and the inaugural Forum for Sustainable Peace and Development in Egypt in November and December respectively.

The Vice President said he would convey the message to President Buhari. He also said President Buhari would be briefed on the request to mediate in the issue between Egypt and Ethiopia over the building of the Renaissance Dam project on the Blue Nile River.

“I would certainly ensure that I convey the strong feelings of the Egyptian government on this point to our president, President Muhammadu Buhari, and I believe that, within the auspices of the AU, we would be able to reach a just and fair conclusion. I’m sure that he would work within the AU to find a solution that is fair to all parties,” the VP stated.

Also, Hamad pledged the full support of the Egyptian government for the candidacy of Nigeria’s Dr. Akinwunmi Adesina, who is running for a second term as president of the African Development Bank (AfDB).

The Vice President had earlier stated that he (Adesina) has done quite well in the first team and that he would do better in the second term.

Speaking further, Hamad noted that, “Egypt and Nigeria are two big nations in Africa in terms of population and capabilities. We also pledge to put our expertise to foster and strengthen economic relations, especially in the economic and energy sector.”

Laolu Akande;
Senior Special Assistant to the President on Media and Publicity
Office of the Vice President
28th October 2019

FG probes nine contracts signed in breach of due process by...