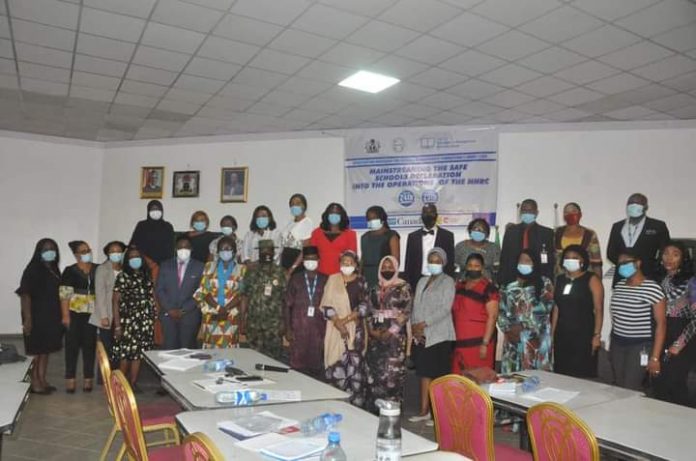 The National Human Rights Commission (NHRC) has launched a two-day training programme of its staff members on Principles of Safe School Declaration (SSD) to further build their capacity towards protection of education from attacks in emergency situations.

The Safe Schools Declaration is an inter-governmental political agreement that outlines a set of commitments to strengthen the protection of education from attack and restrict use of schools and universities for military purposes.

It seeks to ensure the
continuity of safe education during armed conflict.

The Executive Secretary of the Commission, Tony Ojukwu, who declared the training open, noted that “the training is very apt especially as it seeks to bring to life the objectives of the Memorandum of Understanding between the NHRC and the Education in Emergency Working Group Nigeria, EiEWGN”, in respect of keeping faith with the SSD Principles.

The Chief Executive Officer of the Commission while buttressing the importance of the training vis-à-vis the SSD Principles noted that it was ratified by the President of the Federal Republic of Nigeria, President Muhammadu Buhari on 31st December 2019.

According to the Executive Secretary, the Safe School Declaration is a project driven by EiEWGN whose mandate, among others, was to promote the coordination of forum in support of the Nigerian Education System which “sometimes faces some challenges occasioned by insecurity, conflicts and natural disasters.”

Ojukwu commended the Commission’s partners, EiEWGN and Plan International for promoting this very important humanitarian effort “which touches directly on the mandate of the Commission,” saying it would aid in the smooth implementation of the SSD in the Nigeria.

There were goodwill messages at the workshop by representatives from the Ministries of Defence, Education, SSD, EiEWGN and UNICEF, who applauded the commitment exhibited by the Commission in ensuring a full implementation of the SSD Principles in the country.

The Chief Human Rights Officer in Nigeria stated that the training would acquaint staff members with the guidelines for protecting schools and universities from being turned into a military zone during armed conflict and other factors that might be responsible for threatening the smooth running of all levels of the education system in Nigeria in times of emergency.

It is interesting to note that Nigeria was the first of 37 countries to officially endorse SSD Principles in Oslo (2015), and will be hosting the 4th International Conference on Safe schools in 2021.

As of November 2020, however, 105 Countries have endorsed the SSD Principles.

Nasir el-Rufai and the carnage in Southern Kaduna, By Ikechukwu Amaechi