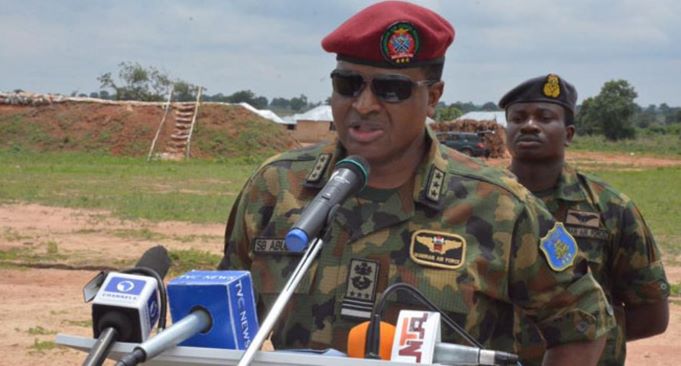 By Bode Olushegun
The Chief of Army Staff, Air Marshal Sadique Abubakar said on Monday that an airstrip undergoing construction in Damaturu will on completion enable an unimpeded bombardment of Boko Haram.
Speaking at Sallah luncheon with troops of the Air Task Force of Operation Lafiya Dole, said the airstrip further boost the ongoing operation against Boko Haram/ISWAP terrorists in the Northeast.
He said on completion of the Airstrip helicopter gunships on air bombardment of Boko Haram enclaves in Yobe state will not need to return to Maiduguri for refuelling and services, as was previously done.
On the luncheon, the CAS said hosting frontline troops during festival activities is to boost their morale and make them have an atmosphere replicating an home settling.
He said hosting such celebrations has been a culture, he had maintained since his assumption of office in 2015; to treat NAF personnel in the frontline to luncheons during festive periods
He noted that these get-togethers foster comradeship and give NAF the opportunity to socialize among themselves in the duty of securing the nation against criminal elements.
Abubakar said: “During my last operational visit to Maiduguri, we highlighted the immense contributions of the Nigerian Air Force through the Air Task Force Operation Lafiya Dole in the fight against insurgency in the North East.
“These contributions have no doubt, helped shape the theatre of operation and provided freedom of action for the ground troops. Despite the challenges of competing resources and COVID-19 induced lockdown, we have through pragmatic planning and foresight, maintained the tempo of Nigerian Air Force Operations, not only in the North East, but other  parts of the country.
” I want to reiterate that not only are we going to sustain operations, we will continue to leap forward based on my key drivers. We have kept the pace in training of both air and ground crews, developed the Regiment speciality to defend our Bases and increased the force structure of the Service, whilst building more accommodation and office infrastructure to cope with the growth.
“On a general note however, I wish to thank you all for the concerted efforts and contributions. As we  are aware, much is at stake and more would be required from us. I urge you not to rest on your oars, neither relent your efforts till we achieve victory,” The CAS said.
He however said  NAF must continue to evolve new methods and put in place  new strategies aimed at eliminating all forms of criminal elements in the nation.
He reminded troops that NAF exploits would not have been possible without the support of the President and Commander-in-Chief, President Muhammadu Buhari, who has provided the resources required to perform assigned duties.
“We can only show our appreciations for the President’s support to the Nigerian Air Force by remaining a discipline force and exhibiting the highest level of professionalism in all our actions.
Earlier speaking, Air Commodore Precious Amadi, the Commander Air Task Force Operation Lafiya Dole, appreciated the Chief of Air Staff for the Sallah luncheon with the troops, saying that Air Marshal Abubakar’s consistent presence in midst of troops is not only a huge source of motivation, but also a staunch indication of the Chief of the Air Staff’s commitment to the welfare and support of personnel.
He said: “Furthermore, recent approvals by the Chief of the Air Staff for the construction of 2 blocks of 3 bedroom married officers’ quarters consisting of 12 flats with complete furnishing and also a block of one by 30 studio apartment for the airmen is highly commendable .
“These projects are a demonstration of your dynamic leadership and commitment at its peak. We can only continue to say ‘Thank You Sir’ for your pragmatic direction and visionary leadership,” Amadi said.
The Special Guest of Honour, Borno state governor, Professor Babagana Zulum , expressed appreciation to the NAF for all the efforts they have been making in neutralising Boko Haram terrorists in Borno state.
Zulum said efforts of NAF has reduced the impact of the Boko Haram terrorists activities in Borno state  , adding that his administration would continue to do everything possible to support NAF in realising its objective of defeating insurgents in Borno and northeast.
While commending the Chief of Air Staff, Air Marshal Abubakar, Zulum appealed to him to provide Air surveillance during the current rainy season to farmlands for the farmer to go to their daily farming activities.
Please follow and like us:

Meltdown in Niger Delta: IYC President kidnapped ahead of eviction of...