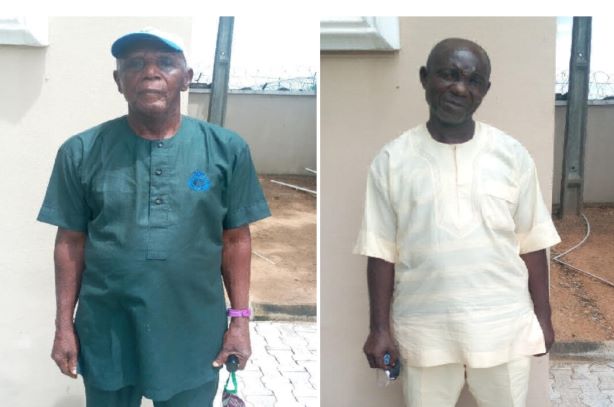 The Economic and Financial Crimes Commission, EFCC, Benue Zonal Office, on Monday, July 20, 2020 arraigned the duo of Victor Gabriel Charles and John Aboyi Omaku before Justice Moris Ikpambese of the Benue State High Court, Makurdi over alleged conspiracy and misappropriation of pension funds to the tune of N19million.

Charles, a former vice chairman, Nigerian Union of Pensioners, (NUP), and Omaku, former Branch Chairman of the union, Benue State Chapter, were arraigned on two-count charges of fraud to which they pleaded not guilty.

Count one of the charge read:”That you, Victor Gabriel Charles and John Aboyi Omakwu on 19th September, 2013 in Makurdi, within the jurisdiction of this honourable court being entrusted with funds of Nigerian Union of Pensioners, Benue State Chapter Makurdi, agreed to dishonestly misappropriate N19,000,000 and thereby committed an offence contrary to Section 96 of the Penal Code (CAP) 124 Laws of Benue State, and punishable under Section 97 of the same Law.”

Following their pleas , prosecution counsel, George ChiaYakua asked the court for a commencement date of trial, while Barnabas Iorheghem who appeared for the first defendant (Charles) urged the court to admit his client to bail on liberal terms, noting that the defendant has been on EFCC’s administrative bail and has not failed to respond to any of the Commission’s invitations. Ikwe Adakole, counsel to the second defendant (Omakwu) adopted the submissions of counsel to the first defendant in asking for bail for his client.

Justice Ikpambese admitted each of the defendants to bail in the sum of N1million with one surety each in like sum. Each surety must have landed property within the jurisdiction of the court and must not be below salary Grade Level 10 if they are civil servants, and must submit a copy of letter of employment as well as copy of his/her identity card to the court.

Wife of Chief Imam murdered in presence of husband, children +...