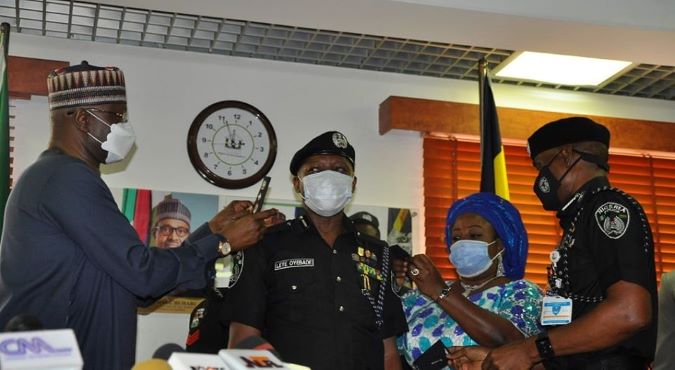 Mba said the ceremony was attended by the Secretary to the Government of the Federation, Boss Mustapha.

He said the SGF congratulated the newly promoted officers and ch​arged them to see the promotion as a call for improved services to the nation. He assured of the Federal Government’s commitment to the ongoing reforms of the Nigeria Police Force by the Inspector General of Police.

The IGP noted that since his assumption of office in January, 2019, a total of forty-one thousand, eight hundred and sixty-three (41,863) officers and men of the Force across different ranks have been promoted to their next ranks. He stated that the promotion exercises – a strategic management approach directed at motivating the workforce in addressing current and emerging internal security threats – have been guided by the principles of seniority and merit and reflective of records of discipline and invaluable experience.

He charged the officers to deploy their intellect and demonstrate sound professional judgement in all their decisions at all times.

The Officers decorated include, DIG Adeleye Olusola Oyebade, who until his promotion to the enviable rank of Deputy Inspector General of Police was a directing staff at the National Institute of Policy and Strategic Studies (NIPPS).

Zulum gets report, as committee recommends new board to reform, regulate...

ICPC recovers N28.2m from Defaulters on sale of FG houses