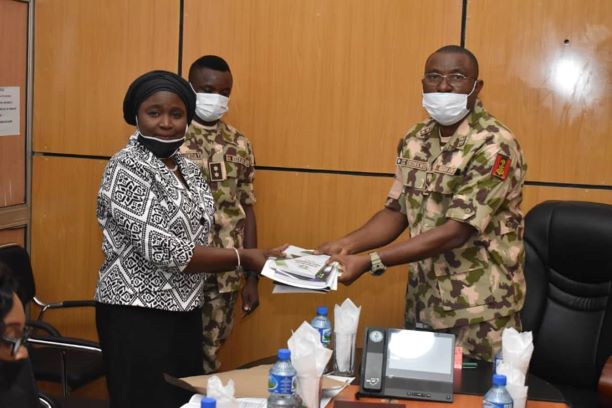 The mobile police officer with The operation Safe Haven Plateau State Command, who allegedly killed, Rinji Peter Bala a three hundred level undergraduate student of the University of Jos along Zaria Road, Jos on the twelfth of May 2020, has been handed over to the police for prosecution.
This was disclosed by the Commander Operation Safe Haven Major General Chukwu Enema Okonkwo, to the plateau State Coordinator of the National human rights commission Jos, Mrs Grace Pam and her team while on a courtesy visit and a fact-finding mission on the recent killing of a student of the University of Jos and other issues of Violation of human rights by officers of the Command.
Pam revealed that the NHRC has begun an investigation into the killing and that the Commission is relying on the Command to ensure that Justice is served appropriately to avoid animosity.
The State Coordinator also explained the mandate, functions and activities of the Commission to the full understanding of the Commander, who was recently posted to the State.
She intimated him on the cordial relationship the Commission has always had with the previous Commanders and urged him to keep the spirit alive.
Pam admonished the Commander to always investigate alleged cases of human rights violations by the military reported to it promptly as well as to try as much as possible to reduce contact with the Civilians by only engaging in serious issues.
The Commander, Major General Chukwu Enema Okonkwo revealed that the visit of the Commission to his Command has better informed him of the Modus operandi of the Commission.

The Commander expressed regrets over the incident which he said could have been avoided, however stressed that the military is very passionate about human rights issues as such does not tolerate breaches of human rights.
He pledged to give his maximum cooperation to ensure that human rights violations by the military are reduced to its barest minimum.
General Okonkwo assured of the Commands readiness to collaborate with the Commission in areas of trainings and sharing of information.