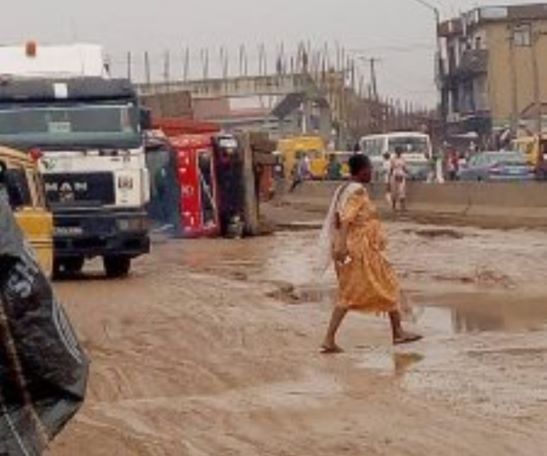 Motorists plying Lagos-Abeokuta Expressway and some residents along that corridor have expressed concern over the deplorable state of the road.

The road users said in separate interviews with the News Agency of Nigeria (NAN) in Lagos on Sunday that the condition of the road had caused loss of materials and human lives.

According to them, apart from fatalities being recorded on daily basis, especially between the Ajala Bus Stop in Lagos and Toll Gate in Ogun, several productive hours were being lost due to the poor condition of the road.

Speaking to NAN at Kola Bus Stop along the highway, Mr Seun Jaiyeola, a Commercial bus driver, said that all the features that qualified the road as a highway had been washed away.

Jaiyeola, who decried the neglect of the road by governments, said that no day would pass without two or three trucks falling on the section between Ahmadiyya and the toll gate.

He said: “I am a daily user of this road, I carry passengers from toll gate to Oshodi, running few trips everyday. The condition of this particular Kola Bus Stop is very bad and dangerous.

“Apart from the heavy traffic that we experience, big lorries and containers fall here, most times. The poor condition of the road has reduced the number of trips we run daily.

“We are begging Gov. Babajide Sanwo-Olu of Lagos and Gov. Dapo Abiodun of Ogun to do something about this road as fast as they can, even though it is a Federal Road. Both Lagos and Ogun sections are bad.’’

Another commercial driver, Mr Ismail Kolawole, said that the road needed total repair, saying that the government should declare a state of emergency on the road.

Kolawole urged both the Lagos and Ogun State Governments to collaborate and give prompt attention to the road.

According to him, the deplorable condition of the road is partly the reason for the increase in the fares between Toll Gate and Agege, Toll Gate and Iyana-Ipaja as well as Ikeja and Oshodi.

He noted that the problem of the road started with small potholes which did not receive any attention until it got to the present deplorable state.

Mr Titus Oyedeji, a private car owner, residing around Obasanjo in Ogun, said that the road had failed completely and required urgent attention.

Oyedeji, a Welder, said: “The question I ask myself daily is why should the government allow a road get to this kind of condition. It is really sad.

“Each day we go through hell here. The road condition has continued to damage vehicles each day.

“As if this is not enough, when we get to Ojuoore-Odiroko road, it is another nightmare.

“You will spend long hours and have one or two things to fix in your cars everyday. Few days ago, my exhaust pipe pulled out because of this road”.

He, however, commended the former Gov. Akinwunmi Ambode of Lagos State for constructing some alternative roads linking Ojuoore from Command, AIT and other adjoining routes.

Mr Michael Elendu, a private car owner, also told NAN at Kola Bus Stop, that the condition of the road was at its worse state, describing the experience on the road as ‘ harrowing’ each day.

Elendu said: “The road has obviously become worse, particularly since the rainy season started and it’s subjecting the users to serious suffering and hardship.

“Government should not allow its citizens to go through this hardship each day. We can only beg the government to look at our pains and reconstruct this road.

“The road is causing cars to develop problems everyday. We just need the authorities to come to our rescue.

“People are dreading to come to this area because of its deplorable state but we that are residents here have no choice than to face it each day,” he said.

Mr Taiwo Lawal, a trader selling eggs at the Toll Gate, lamented that huge losses were recoded daily because of the deplorable state of the road.

Lawal said: “This road is terrible. Apart from spending several hours, it spoils cars because of the deep potholes everywhere.

“If you carry 300 crates of eggs, be sure that no fewer than 30 to 50 crates will either crack or break before getting to the toll gate. We want the government to help us,” he said.

NAN reports that the several sections of the road between Abule-Egba and Toll Gate had been washed away, leading to gridlock and causing articulated vehicles to fall repeatedly. (NAN)

Six COVID-19 patients to be discharged in Lagos

PDP to Buhari: Visit Kano to “identify with the people”