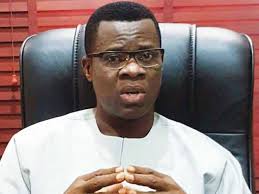 The Resident Electoral Commissioner (REC) of the Independent National Electoral Commission (INEC) in Akwa Ibom State, Mike Igini, a lawyer, has declined to react to the apology of a chieftain of the All Progressives Congress (APC) in Edo State, Prince John Mayaki, over his earlier libellous statement.

Mayaki, who was the Chairman of the Media Campaign Council of Edo APC, on Friday in an online statement, admitted that he got wrong the August 27 this year’s allegations he levelled against Igini, ahead of the September 19 this year’s governorship election in the state, with Pastor Osagie Ize-Iyamu as the standard bearer of the main opposition party (APC).

Igini, an indigene of Delta State, who is a former REC of INEC in Edo State, sued Mayaki and the state’s Chairman of the APC, Col David Imuse (retd), for accusing him of meeting with Governor Godwin Obaseki of the Peoples Democratic Party (PDP) at his (Obaseki’s) residence in Benin, the state capital, and allegedly heavily bribed to rig the crucial and  bloody election in favour of Obaseki and the PDP.

Màyaki said: “As the year winds down, I have spent some past few days reflecting on my activities as a professional journalist conducting credibility, integrity and fact checks on some of the statements I authored and have therefore stumbled on some embarrassing ones among which is this particular one: ‘APC accuses INEC REC, Mike Igini of colluding with Obaseki over secret night meeting,’ and with a rider: ‘REC left Governor’s residence with sacks of money.’ This is an embarrassment even to my humble self. I must quickly admit, as the story proved fatally wrong and unable to pass credibility check.

“As a Christian, I strive daily to have a conscience void of offence towards God and towards men, and I am willing to apologise to whomsoever I may have offended in the course of my duties, knowingly and/or unknowingly.

“In the year ending, August 27 was the most unethical day for me. It was during the period of my assignment as the Chairman, Media Campaign Council of the All Progressives Congress (APC) in the September 19 governorship election in Edo State, that I released the statement at 5:27 p.m., without cross-checking and interrogating my source. As a professional journalist, rather than base my judgment of the information from this source on its news value and public’s right to know the unbiased truth, I unfortunately allowed my political interest to motivate and take better part of me.

“I have taken time to scrutinise and review my source, the story itself and also listened to the testimonies of other credible persons on this statement and the impeccable character of Mr Mike Igini and I have come to the conclusion and admission that something went wrong – my investigation and findings have now revealed that the story was not only untrue, but unable to pass integrity and credibility checks.”

APC’s ex-chairman of the media campaign council in Edo also reiterated that he took his assignment with a great dose of responsibility, privilege and honour.

He said: “I appreciate the confidence and trust reposed in me to serve as the Chairman of Media Campaign Council of Edo State APC, but for the source who thought he could advance my political interest with fake news and thinking propaganda could land us a win, these have proved wrong. The source did not only mislead me to mislead the people, but also to impugn on the reputation of Mr Mike Igini and for which I am deeply embarrassed – I apologise.

“I agree, I was manipulated by the source and also complicit in the achievement of his goal, because I failed to apply the simple rules of investigative journalism and logic to the allegations raised against one of the highly-respected and reputable RECs of INEC – as the statement was highly offensive and I should not have allowed the source to have a better part of me. I am sorry and I regret that I did.

“I failed by inadvertently allowing sinister forces, who were hell-bent on destroying our institutions, to abuse our trust and use the untrue information to achieve their nefarious objectives. I will learn from these embarrassing moments and I am determined to win back the confidence of my readers by putting in more hard work in whatever assignment under my supervision.

“I tender my profound apology to Mr Mike Igini; the Governor of Edo state, Mr Godwin Obaseki; Mr Anselm Ojezua (a former factional Chairman of APC in Edo State) – whose names appeared in the statement and on whom the story touched directly. By extension, I apologise to INEC, for the inconveniences or embarrassment the statement occasioned the electoral commission, as I hold Mr Mike Igini in the highest esteem.”

Mayaki also stated that he was thankful to his conscience for acknowledging the great mistake and that he was equally glad that he listened and also to learn.

The APC chieftain in Edo declared that he had resolved to do his best to re-win the trust of all friends and admirers, readers and other people he had offended with the unfortunate “August” statement, adding: “Human beings make errors, I am human and I am no exception.”

When the REC of INEC in Akwa Ibom state was contacted yesterday through the telephone for his reaction to Mayaki’s apology, he said: “I have no comment, for now.” (The Nation)

COVID-19: Bodies are being left in streets in an overwhelmed Ecuadorian...