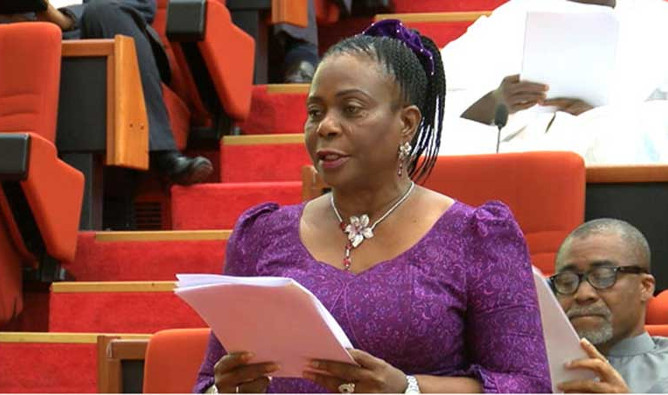 The Clerk to the Senate, Nelson Ayewoh, administered the oath on Olujimi at 10:40 am during plenary.

The lawmaker, who was the Minority Leader in the Eighth Senate, was last week declared winner of the 2019 Senatorial election by the Kaduna Division of the Court of Appeal.

The Court, which nullified the election of Spokesperson of the Senate, Dayo Adeyeye, upheld the tribunal judgment that declared Olujimi and the candidate of the People’s Democratic Party as winner of the senatorial election to represent Ekiti South.

The President of the Senate, Ahmad Lawan, after the lawmaker was sworn in, called for unity among all members of the upper chamber.

He added that Olujimi’s victory had brought the number of female senators to eight in the upper chamber.

“Let me congratulate the Minority leader in the eighth Senate. With this, we now have eight very solid female Senators.

“We pray that this addition will bring additional productivity and stability to the Senate.

“I call for unity and of course, we should remain focus and do those things that will make our country great”, Lawan said.

Edo Speaker to AGF: Don’t allow desperate politicians to use your...

There’s need for voices of African Child to be heard, says...

Jonathan to Biden: Look beyond party, be magnanimous in victory