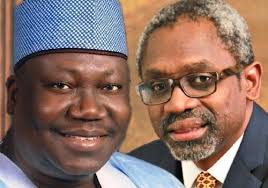 Lawan and Gbajabiamila
The leadership of the Senate and House of Representatives on Monday held a meeting to discuss the non-payment of severance allowances for legislative aides who served in the National Assembly between 2015 and 2019.
The Senate President, Ahmad Lawan, and the Speaker of the House of Representatives, Femi Gbajabiamila, met with the relevant agencies of government led by the Minister of Finance, Budget and National Planning, Zainab Ahmed.
According to a statement by the Special Assistant (Press) to the Senate President, Ezrel Tabiowo, the meeting, which was held behind closed doors, also had principal officers in attendance.
Also present at the meeting was the Director-General of the Budget Office of the Federation, Ben Akabueze.
Deliberation
Speaking on the reason for the meeting, Mr Lawan said the essence was to ensure the payment of severance allowances for legislative aides who worked between 2015 and 2019.
“The tenure of legislative aides employed by the National Assembly Commission and posted to members of the National Assembly is tied to the tenure of the National Assembly. Therefore, they are entitled to severance allowance,” he said.
The Senate President disclosed that prior to the intervention by both chambers on Monday, the Senate leadership met with the management of the National Assembly and the Revenue Mobilisation Allocation and Fiscal Commission (RMAFC) led by the Chairman of the Commission, Elias Mbam, last week.
He said the leadership identified some difficulties on who is supposed to pay the severance allowances to aides who served from 2015 to 2019.
“It is only fair that we give them what is due to them (aides). We realise there was need to bring on board for this discussion the Ministry of Finance, Budget and National Planning and the National Assembly Service Commission as well, so that in this meeting we are able to discuss and finalise where the source of the severance allowance for the legislative aides will be.
“And the presence of both chambers here tells us that this is a matter that affects the entire National Assembly. All the aides of the Senators and House of representatives who completed their assignment are affected on both sides. That is why the principal officers of both chambers are here,” part of the statement read.
Past protests, bloated service
The demands by these set of ex-legislative aides for salaries and allowances due to them lingered all through the eighth assembly.
An investigation in 2016 revealed that no fewer than 2,570 aides are engaged by the 469 members of the 8th National Assembly.
Out of the number, 700 aides work for lawmakers in the Senate, while the remaining 1,870 are engaged by House of Representatives members.
As provided in the National Assembly Act, each lawmaker, excluding principal officers, is entitled to five aides – one Senior Legislative Aide (SLA), two legislative aides, a personal assistant and a secretary.
Also, the President of the Senate is entitled to 45 aides, his deputy, 30, and 20 each for principal officers.
Similarly, the Speaker of the House of Representatives has 35 assistants, Deputy Speaker, 15 and 10 each for the six principal officers of the House of Representatives.
The number of aides to each legislator, it was gathered, includes those in their constituency offices.
Drastic measures?
Meanwhile, the monthly emolument of the aides, which ranged from N150, 000 to N250, 000, sources at the assembly said, has been reduced to between N75, 000 and N180, 000 by the current leadership of the assembly.
All the aides are paid from the coffers of the assembly.
The aides had in October 2018, staged a protest at the National Assembly Complex to demand allowances – a protest which the former Chairman of the House Committee on Media and Public Affairs, Abdulrazak Namdas, described as “uncalled for.”
The aides also wrote a petition to President Muhammadu Buhari and the Economic and Financial Crimes Commission petition demanding an investigation into “criminal diversion of their budgeted legitimate entitlements.”
They had also asked the EFCC chairman to bring the culprits to book and ensure the prompt payment of their allowances.
Source: Veracity Desk
Please follow and like us:

Presidency to Ortom: You are inciting farmers against herders; Christians against...

Dead Emir: Zulum in Biu to condole with Emirate

Thunder strike kills Evangelist, one other in Delta community