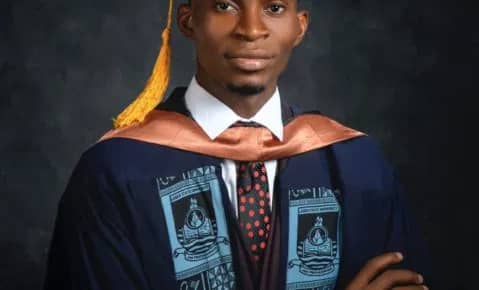 For finishing with the Cumulative Grade Point Average (CGPA) of 4.95 on a scale of 5.0, Oladimeji Shotunde, the best graduating student of the Lagos State University (LASU), has won a post-graduate scholarship to any university in the world and a N5 million cash prize.

Governor Babajide Sanwo-Olu rewarded the excellence attained by the valedictorian at the 24th convocation of the university.

Shotunde, a 22-year-old, who finished from the Department of Business Administration in the Faculty of Management Science, also got an offer of automatic employment into the State’s public service.

Besides, the Governor awarded a cash prize of N5 million to the Best Master’s Degree student of the school, Sola Olabanjo, who finished his Master’s Degree in Computer Science with the Grade Point of 5.0.

Sanwo-Olu, who is still on self-isolation after contracting Coronavirus (COVID-19), joined the event virtually from the State House, Marina. He is the Visitor to the University.

The Governor said Shotunde’s record-breaking feat had set a new academic standard for the school, stressing that cash reward was his personal effort at promoting academic excellence and honouring brilliance. He promised that his Government would continue to provide students with the best educational experience that will make them relevant locally and outside of Nigeria.

In his address, Sanwo-Olu disclosed that Lagos has started to brace itself for the opportunities in manufacturing driven by application of technology and artificial intelligence to raise the sector’s capacity and output.

He said the State Government had already set off the process of transforming the local manufacturing sector, with its collaboration with University of Pittsburg in the United State (U.S.) to establish manufacturing assistance centres across Lagos to train young people in modern manufacturing skills, using technology and knowledge of artificial intelligence.

Sanwo-Olu said his administration’s education investment was to assist students in the Government-owned tertiary institutions across the State to harness their potential and talents for promoting excellence in industries, entrepreneurship and self-sustenance.

The Governor also said the State Government had donated a building and a piece of land in Victoria Island for the takeoff of an Executive Collaborative Programme to be run by LASU in partnership with Cornell University in New York, adding that his administration had expanded the capacity of School Jobs Initiative to accommodate the needs of students in eight tertiary institutions in Lagos.

The Governor acknowledged LASU’s recently-attained recognition by World Bank as the Best African Center of Excellence for Innovative and Transformative Science, Technology, Engineering and Mathematics (STEM) Education, and its ranking as the Second Best University in Nigeria by Times Higher Education World University Rankings 2020.

Sanwo-Olu applauded the feats, but urged the school management not to rest on its oars until LASU becomes the best in Africa.

“Like other State-owned institutions, I promise you that LASU will not be neglected. As we position the university to compete on the global stage, we will continue to make the needed investments to sustain the institution. With education as the third most critical component of our THEMES Agenda, we will strategically tackle all issues related to the growth of the education sector, while creating the enabling environment for our students, graduates, and youths to thrive and manifest their inherent greatness.”

Sanwo-Olu congratulated the graduands for their academic achievements, noting that their sterling performances in course of their programmes and zest for academic success had put LASU on an enviable pedestal.

Having been awarded certificates in their respective disciplines, the Governor said the onus was on the graduands to apply their knowledge and make positive differences.