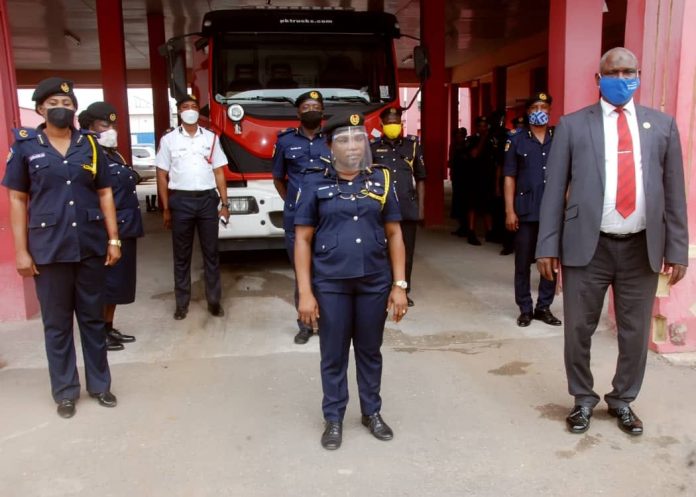 The Lagos State Government has promoted 84 firefighters, just as it announced its intention to establish three new fire stations in different parts of the State.

The Permanent Secretary, Lagos State Ministry of Special Duties and Intergovernmental Relations, Dr Jimoh Yusuf, who disclosed this during the ceremony organised to celebrate the newly-promoted officers at Alausa Fire Station in Ikeja, congratulated the 84 officials of the Lagos State Fire and Rescue Service on fulfilling all the requirements in the recently-concluded year 2020 promotion exercise.

He revealed that the Lagos State Government “intends to build three new Fire Stations at Ebute-Elefun, Ajegunle-Apapa and Abule-Ado, in a bid to enhance the response time to fire incidents in the area and adjoining communities as well as curb logistic challenges faced by firefighters when responding to emergency situations.”

Yusuf described the Lagos firemen as the best firefighters in Nigeria based on verifiable facts and his personal encounter with them while attending to fire incidents.

“I am particularly moved with the quality of input and commitment of our firemen at fire incidents and l am sincerely left with no option than to appreciate you and adjudge you the best in the federation”, he said.

He also enjoined the newly-promoted officers to step up their performance, adding that the promotion meant more work and commitment to the service of humanity.

While applauding the officers for excelling during the promotion exercise and on their newly-attained ranks, Adeseye commended the Governor of Lagos State, Mr Babajide Sanwo-Olu, for his unrelenting support since the inception of the present administration.

She applauded the governor for providing the necessary equipment for firefighting and looked forward to improved welfare packages for officers as a way of appreciating their gallant efforts in the discharge of their responsibilities.