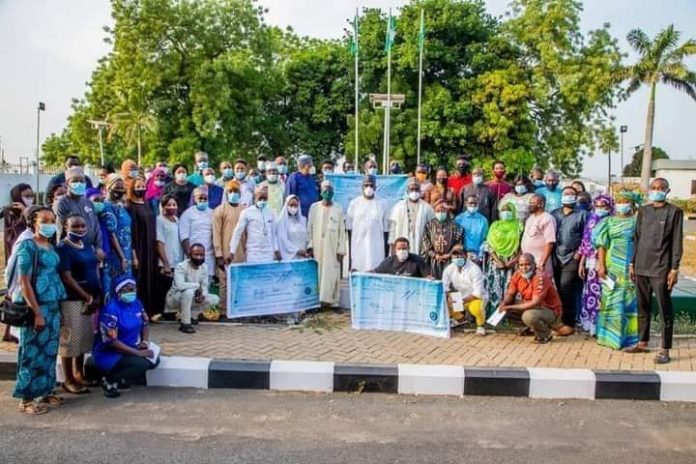 The government had in November engaged an independent insurance adjuster and empanelled an 11-person committee, including civic groups and representatives of the business owners, to fact-check claims submitted by 342 businesses who filled an online form to benefit from a N500m SME Recovery Fund established to support the victims.

Of the 342 firms who registered, only 64 turned up for verification out of whom the committee established 48 for compensation while 8 injured vigilantes manning the looted Cargo Terminal were also captured for some support.

The Governor presented cheques to all the affected businesses on Wednesday in Ilorin, with the highest beneficiary getting a grant of N17m, the middle earner getting N15m, and the lowest getting N100,000 as recommended by the adjuster and the committee.

The total grants awarded stood at N180,775,000 in line with the recommendations of the committee.

“We really sympathise with you and we regret that such a thing ever happened to businesses. We do not have the capacity to give you everything you have lost but this is our token of support to encourage you not to give up,” AbdulRazaq remarked just before handing them their cheques.

He said the government was always willing to help businesses to grow as part of its efforts to build an economy outside of the civil service that was currently the biggest labour demographics in the state.

“The trouble emanating from #EndSARS incident has come to pass but it left a lot of victims behind and you are some of the victims. It is not your fault that your businesses were damaged but as an entrepreneur, we believe in what you are doing,” he said.

“We want to turn Kwara from being civil service state to be an enterprising state and entrepreneur like you must be encouraged. We want more people to do what you are doing and if we give you the confidence to stay and rebuild your businesses in Kwara, more people would be encouraged. You are pathfinders, you are setting pace and showing the ways to others who want to achieve in life.

“Government cannot provide all the jobs but it should be providing the right atmosphere for ease of doing business. That is why we feel very strongly about encouraging you to achieve what you need to do. So, those of you that have started repositioning yourselves, we wish you well and thank you.”

“Let me congratulate Your Excellency and the entire citizens of Kwara State for this laudable feat by taking the bold step to reduce the suffering of the affected shop owners occasioned by #EndSARS protest. This is in line with avowed commitment of the present administration to create enabling environment and eliminate all forms of constraints especially the SMEs in the state,” he said.

He said the step of the government would help to boost public confidence in the administration.

Representative of the Elite Network for Sustainable Development (ENETSUD) Fatimah Bintu Dikko said the whole process of ascertaining who got what and what they got was credible and transparent as the group was on the committee to observe what transpired.

“We commend the government for what it is doing today by putting smiles on the faces of the victims of #EndSARS protest. This is exactly what we at ENETSUD want. We want every process to be transparent and we can see transparency in the disbursement of this fund. We can see the beneficiaries and we can see the cheques being given to them. We can conveniently say that this is promise made and promise kept. Please keep it up,” she said.

Representative of the beneficiaries Ahmad Lawal commended the government for the prompt intervention and for acceding to the requests of the affected business owners.

“We thank you immensely for your empathy and the fatherly role that you have played in ensuring that those businesses who were affected during the EndSARS protests get back to their feet. We were at your office a few days after the incident and, surprisingly, all of our prayers were accepted by you. That is what is culminating into what we are having here today,” he said.

“We requested that business community should be included on the committee that would determine who gets what and that prayer was answered; we requested that action should be expedited so that people can get back to their normal life as soon as possible and that prayer was also accepted. I think I can confidently say that no other state has been able to compensate those whose businesses were looted during the EndSARS protests as soon as you have done.

“We cannot thank you enough because, as I will continue to say, the government can decide to turn a blind eye to what happened. Nobody can challenge government for that. So, for you to have gone extra miles in ensuring that we get some compensation, that is almost unbelievable for most of us. This really shows that the current administration is really into business of ensuring that Kwara State becomes an enterprising state.”