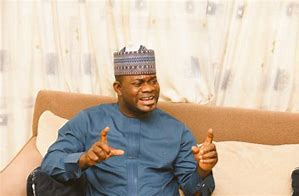 Yahaya Bello
A coalition of civil society groups under the aegis of Nigerian Integrity Movement (NIM) said it had uncovered a plot by Justice Richard Olorunfemi of Lokoja High Court to deliver a premature judgement capable of causing unabated war in the state.

The organisation said available information at its disposal suggested that the Judge was “under serious pressure from Kogi State Governor, Alhaji Yahaya Bello and the candidate of the All Progressives Congress (APC), to deliver judgement of preelection matter 10 days before Kogi Nov 16 Gubernatorial Election.”

The NIM said the law stipulated at least 180 days hearing for the case to be properly investigated before any judgement.

This move is being scrutinized by the Civil Society Group, Nigeria Integrity Movement as the the group is watching with keen interest to see how this plot plays out.

The spokesman of NIM, Kayode Esan, in a statement said “it will amount to anarchy should the Judge yield to the wish of the power that be.”

The statement reads, “It is obvious Justice Richard Olorunfemi is under serious pressure, from the powers that be, and that his lordship May be forced to make pronouncement that is capable of setting Kogi State on fire”.

The group therefore cautioned that His Lordship “must be closely monitored by the men of Department of State Services (DSS), the only secret service that has its reputation intact to save Kogi State from this imminent crisis.

NIM wondered why a case that was still at the cross examination stage which demands more hearing should give judgement in a haste.

Esan said NIM has put in place measures “that will checkmate the behaviour of Justice Richard Olorunfemi”, and thus urges the people of the state to remain calm as they are on top of the situation.

How my husband died, By Evelyn, T.B. Joshua’s wife

Buhari’s Christmas Bonus for the Police By Femi Adesina