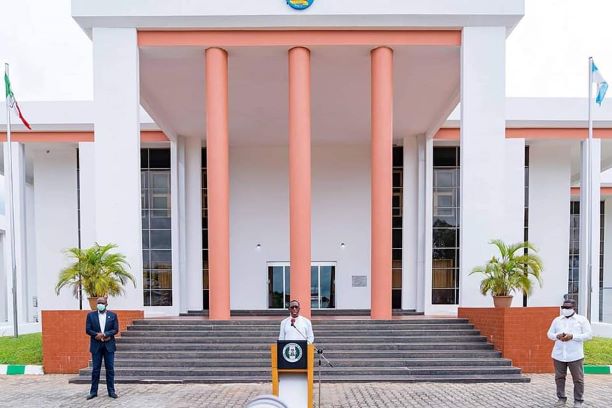 Governor Ifeanyi Okowa of Delta on Tuesday imposed a dusk-to-dawn curfew in the state, saying it was additional measure to complement government’s efforts at stemming the spread of COVID-19 around the state.

The governor, who made a broadcast to residents of the state, also announced the extension of the 14-day Lockdown which began on April 1, for another two weeks and said that the curfew would run for the period of the lockdown.

He explained that painful as it may be, extending the lockdown and imposing the curfew were inevitable in view of current developments in the state, including three confirmed cases of COVID-19 and the disobedience of the restriction rules by some persons.

He stated that the curfew would be from 7 p.m. to 7 a.m. during the period.

“Having taken cognisance in the upscale of cases nationally, standing at 343 today, spread across 19 states and the Federal Capital Territory, and the need to ease the process of contact-tracing, the stay-at-home order has become more necessary.

“For the safety of our people and to enable us track, identify, isolate and test all contacts, by the powers vested on me in line with the Quarantine Act and the subsequent Infectious Disease Regulation 2020, I hereby extend the stay-at-home order for another period of two weeks.

“We do know that this will impose some pains to our people but it is for public good and for the interest of our health and I want to urge all Deltans to please observe the stay-at-home order.

“We believe that in the next two weeks we will be able to track all contacts, identify all possible cases and be able to take the needed actions.

“We pray to God that the cases we have in Nigeria will not escalate beyond what we have at the moment,’’ Okowa said.

He thanked Deltans for complying with the lockdown, and health officials, security agencies, donors and all others who contributed to the effective implementation of the lockdown.

The governor particularly commended the Commissioner of Police in the state, Mr Hafiz Inuwa, for taking immediate action in dealing with policemen who caused pains to some health workers.

He assured medical and health workers of the state government’s commitment to provide better welfare package for them for the job they were doing, adding that the state’s committee on COVID-19 would soon announce hazard allowances to be paid daily to the health workers.

He recalled that the state recorded the Index case on April 7 ,adding that since then three cases have been reported but lost one of them at the Isolation Centre at Delta State University Teaching Hospital, Oghara.

The governor explained that the case was presented late and that the patient had other ailments, which led to his death even before the result of the test conducted on his samples, which was positive, was returned from the laboratory at Irrua in Edo.

“We have two cases that are active; one is being managed at Delsuth, Oghara and the other at our Infectious Disease Centre at Asaba, and both persons are doing very well,’’ he said.

The governor also announced that the state’s food bank recently established because of the hardship posed by the restrictions associated with COVID-19 would be open for distribution of food items to peoples in a few days.

“We have also put up a food bank and we are getting the last supplies of our initial orders and by the grace of God, in the next 48 to 72 hours, food will be sent across to support those who do not have access to food in all wards of the State.

“We use the Federal wards as a means of distribution, concerning this and the items will go to all Deltans and not restricted to party politics.

“We will remain accountable and we will ensure that the monies and the food items donated are put into proper use,’’ he said.

Okowa reassured health staff that they would be adequately remunerated in the course of their duties on the pandemic and said that the government was working out the details.

He added that the state government was producing face masks which would be distributed to Deltans free-of-charge.

Obasanjo, Ooni, other leaders converge on Abuja, meet on state of...

VAR to be used in all 52 AFCON matches in Cameroon

As Dr Ngozi Okonjo-Iweala steps in the WTO leadership saddle with...