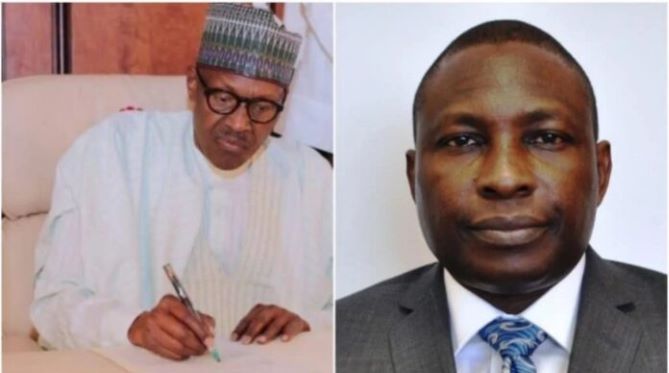 n a sweeping move, President Muhammadu Buhari has suspended no fewer than 11 top officials of the Economic and Financial Crimes Commission (EFCC), as the probe of the lengedary pillage under the watch of its suspended Acting Chairman, Mr. Ibrahim Magu continues to rattle the agency unabatedly.

The New Diplomat learnt late Tuesday that the top officials including the Executive Secretary of the Commission, Mr. Olanipekun Olukoyede were suspended to allow for unhindered investigation of the Anti-graft agency.

According to a source, “they were suspended for various alleged criminal and corrupt infractions.”

“All the top officials in the agency have been suspended, their offices locked, to prevent any tampering with files at the commission”, the presidency source added.

Olukoyede who became the Secretary to the EFCC in November 2018 was a former Chief of Staff to the embattled Magu. The Ikere-Ekiti born senior lawyer replaced Mr. Emmanuel Aremo, whose five-year tenure expired in July 2018.

However, Mr. Mohammed Umar Abba, the present acting head of the agency got the presidency’s nod to continue to oversee the EFCC as he was given a clean bill, the source added.

For the second week running, the underfire Acting Chairman of the agency has been facing the presidential panel headed by retired Justice Ayo Salami, griling him over financial allegations and recklessness including money laundering.

Members of the probe panel have been picking the brain of the Nigeria’s supposed anti-corruption czar to unravel facts on allegations that he re-looted funds recovered by the commission. And that he accepted bribes to pervert cases of graft.

Magu has also been accused of mismanagement of recovered assets by the EFCC.

Among the issues Magu is helping the panel to resolve are wide discrepancies in figures of recovered monies published by the agency.

Part of the files that the probe panel has been sifting through is a report by the Nigerian Financial Intelligence Unit (NFIU) which indicated that Magu may have used different sources to siphon money from the EFCC, and in some cases collect bribes from suspects.

NFIU report showed that a particular Bureau de Change, owned by one Ahmed Ibrahim Shanono linked to the Acting Chairman based in Kaduna has more than 158 accounts and has been receiving huge sums of funds.

The cleric was alleged to have bought a landed property on behalf of Magu worth N573 million in Dubai, United Arab Emirates.

“Another individual who is helping in laundering funds for the Acting Chairman and who has been referred to in several petitions is one Pastor Emmanuel Omale (Hand of God Prophetic Ministry).

“He is reported to have traveled to Dubai with Mr. Magu and his name was used in purchasing property in Dubai for Mr Magu.

“As an unknown pastor, the NFIU’s report showed huge movement of funds ranging from N573,228,040.41,’’ the report said. However, Omale has denied the allegations, backing his denial with a legal action.

Meanwhile, Magu has also been accused of allegedly failing to give proper account of missing 332 out of the 836 recovered real estate properties as of March, 2018.

Also, the indicting report of the Presidential Committee on Audit of Recovered Assets (PCARA) that covered the period of May 29, 2015, to November 22, 2018, raised concerns over the contradiction in the recovered funds by Magu.

“These inconsistencies cast serious doubt on the accuracy of figures submitted by the EFCC. It is the committee’s view that the EFCC cannot be said to have fully accounted for cash recoveries made by it.’’

The Salami-led panel has it work well cut in determining among other mandates “whether assets recovered during his tenure, whether locally in Nigeria or abroad, are being kept safely in a manner as to preserve their original value and determine:

“Whether all the assets could be properly accounted for by the Ag. Chairman.

“To confirm if any of the assets have been diverted to the benefit of the Ag. Chairman, his family, relation, friends or favoured staff.

“To recover any such diverted assets and return back to the EFCC or appropriate government agency.”

You have a case to answer, judge tells couple in alleged...