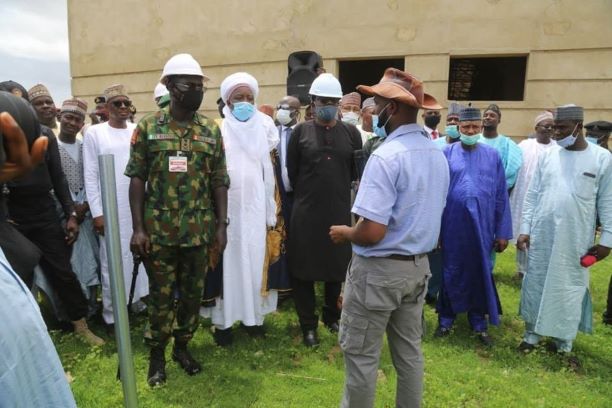 According to the Acting Director Army Public Relations Col. Sagir Musa, the Chief of Army said the developmental projects will impacts security, socio-economic activities and development of Zamfara state.

Musa said Gen Buratai expressed satisfaction with level of ongoing works and provision of facilities in the RUGA settlement after a guided tour of the vast expanse of land.

He said the COAS applauded the Governor for seizing the initiative to address the root cause of the perennial Herders – Farmers clashes with attendant deaths and destruction of valuable properties running into huge amount of money.

The Acting Director Army Public Relations further stated that the COAS urged other States’ executives to key into this laudable project which have multiplier effects on both security and the economy.

He said the COAS observed that on completion, the RUGA project will provide ample opportunities for youth employment, agricultural activities and industrialization in Zamfara state. “All these activities will impact positively on the welfare and well being of the people of Zamfara state in particular and Nigeria in general,” the COAS added.

Acting Director Army Public Relations said at the Emir of Maradun’s palace, General Buratai reiterated the resolve and determination of the Nigerian Army to tackle banditry and other criminal activities  with the establishment of Special Army Super Camps in Batsari and Faskari, the security threats and other vices will soon be addressed” he  said.

Musa said the Super camps are designed to plan and project raids and offensive operations against identified bandits’ hideouts and routes. He therefore solicited the support and cooperation of the general public in the area of providing information that will guide and determine the conduct and success of the operations.

The Emir of Maradun, Alhaji Garba Muhammad Tambari expressed appreciation for the visit and promised to mobilise his subjects to support the military operations in his domain.

In recognition and appreciation of the COAS’ commitment, selfless services and uncommon dedication to duty in the struggles to  restoring peace and security, the Emir conferred on General Buratai the traditional title of JARMAN MARADUN.

The Governor, in his remarks, called on the unrepentant bandits to surrender their arms and key into ongoing zamfara state peace negotiations.

He further promised to provide resources in support of the Nigerian Army and other security agencies to discharge their duties successfully.

US condemns killings of rice farmers in Borno