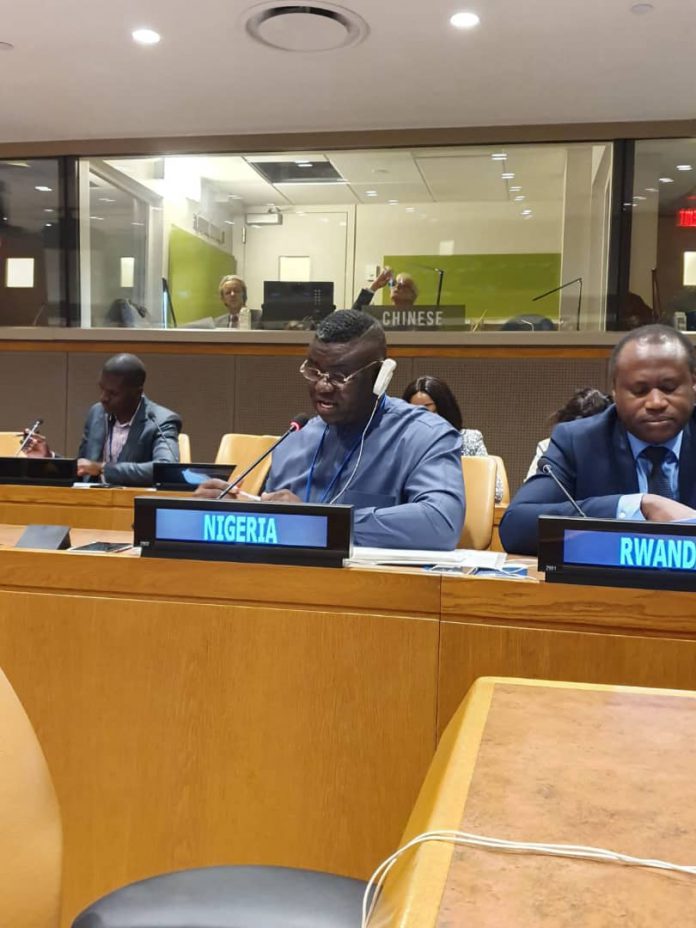 Minister of State for Finance, Budget and National Planning, Prince Clem Ikanade Agba, was at the United Nations General Assembly (UNGA) in New York to showcase Nigeria’s efforts at domesticating the integrated Sustainable Development Goals (iSDGs) to the outside world. He speaks on the sideline of the event with LEON USIGBE on the benefits of its implementation to Nigerians.

You were at the United Nations General Assembly meeting in New York, the United States of America (USA). What exactly is your mission there?

Like you know, we had this side event to speak to our report on domesticating the Integrated Sustainable Development Goals (ISDGs) model in Nigeria. Like I said during my remarks, we are apparently one of the first to have done so in Africa. If you look at the SDGs, they are about 17 and you cannot take one without the other because they are all interrelated. If you don’t take them together, you might be fixing one problem and creating another somewhere else. That is why there was the need for an integrated SDGs model rather than using the normal Excel Spreadsheet to work out the issues.

Going forward, we want to use this model in developing our long term plans and to ensure that we are able to tie the plans to the budget. We believe it is also going to help us effectively with budget monitoring and evaluation. So, that is one of the reasons I was in UNGA to showcase what we are doing with the ISDGs to the world. We were also there to meet with our other counterparts to understand what is it that they are doing; see things that we can learn from them and share our own experiences too.

What is the new thing you are taking away from the interactions and which is not currently available in the ISDGs implementation in Nigeria?

I have not had that particular discussion with other countries. Rather, they are trying to learn from us because we are ahead of them on SDGs. A couple of them have expressed their interest to go into further discussion with us in order for them to understand how we are going about it and with a view to helping them and also to domesticate the SDGs model in their countries.

There is the perception among Nigerians that talks about the ISDGs are mere abstract and that people want to see concrete achievements. What can you point to as the achievements under the ISDGs?

It is no longer news that we have the N-Power programme; it is no longer news that we have the Social Intervention Programmes (SIP). All of these are part of achieving the SDGs because you have to bridge inequality in the economy and that is why those stuffs, such Tradermoni, are going on. There are lots of investments in infrastructure; a lot of money has been put into rail; a lot of money is going into road construction. Again, all of these are with a view to improving our infrastructure. This is going to create job and also reduce poverty. The problem we have is that of finances, revenue. A lot of people think that when you talk of budget, that budget is money. But budget itself is not money. Budget is the expectation of the revenue you intend to get on your own and how you need to source other revenues as loans in order to be able to fund the budget. That is one aspect of it.

The other one is the expenditure side of it. So, you look at both revenue and expenditure. In order to be able to critically take care of the expenditure, we need to take care of the revenue aspect which is the challenge we currently have. This is because government seems to be doing a lot of things that I believe the private sector can partake in. The expectation also from our people is that everything should be provided free. We complain of power, that we don’t have enough power. But how many Nigerians are prepared to pay the right price for delivering power? We complain about bad roads. How many of us truly pay our taxes because government revenue is going to come from these taxes apart from the oil revenue? You know, there seems to be this attitude of ‘you want something, but you don’t want to pay for it.’ So, it is not just a thing for government. It is the duty of all of us to make our contribution, whether we are in government or not; everyone playing his or her roles.

You talked of integrating the main areas of concerns into the ISDGs in the implementation of the Economic Growth and Recovery Plan (ERGP). What are the potential benefits of the integration?

The Economic Recovery and Growth Plan (ERPG) was a short term plan that was put in place to take Nigeria out of recession. If you look at it critically, there are nine priority areas that were set aside. But when you look at the SDGs, we are talking about 17 goals. It is much more than the 11 Economic Recovery and Growth Plan priorities. So, if you take the ERPG along with the SDGs, we believe that will give us more growth and we will be able to quicken growth within the economy, create jobs and, ultimately, help to take millions of our people out of poverty.

How can government get around the issue of money to finance ISDGs and get the desired results?

First things first; we will use what we have and direct them to the priority areas. We are not going to spread ourselves so thin because we want to cover everything and then achieve nothing. We would then determine what those priorities are and focus on them. It is like you have a loaf of bread. You just have a little butter and you want to make a sandwich. If you spread it across the entire bread, you will have no sandwich. So, it is best to use it to a limited number and be able to make an impact. That is working for us. But going forward; we are looking at our critical infrastructure, including rail and road and be able to work out the economics and go out to the private sector to see if they will show interest in this area because, ultimately, they will be able to have the return if they are concessioned to them.

How then do you plan to factor in the private sector in and what will be the benefit?

The private sector operators are Nigerians. They are within the economy; they can grow the economy. We cannot on our own make our plans without getting them involved. So, we are going to look at our critical stakeholders across as we develop the next succession plan and then get each and everyone involved. Private sector funding is important because government alone cannot take care of everything. That is why I said we would identify the infrastructure. Road for instance, if it is not a major road that has traffic, the private sector will not be interested in investing because, for them, it is all about being able to recoup their investment and making profit. Those roads have to be maintained.

If we were to take the rural roads and ask the private sector to invest in them, they will not show interest because they will not be able to recoup their investment. That is why I said we would take inventory of our infrastructure and determine where they are economically good enough to be able to attract these private sector investments so that government can take the limited funds into other areas of the economy. We may try to open up the rural areas where a lot of agriculture activities take place; we will also try to put a lot more into the mining sector to encourage employment.

What is the role of state and local government areas in the ISDGs implementation?

The implementation will not be complete if it does not go to the sub-national level, the states and the local government areas. They all need to use the ISDGs so that we don’t work at cross-purposes. We will encourage them to do this and we are talking to some of our development partners who are also willing to fund some of these domestications.

2023 Presidency: South-East ready to go on their knees before other...