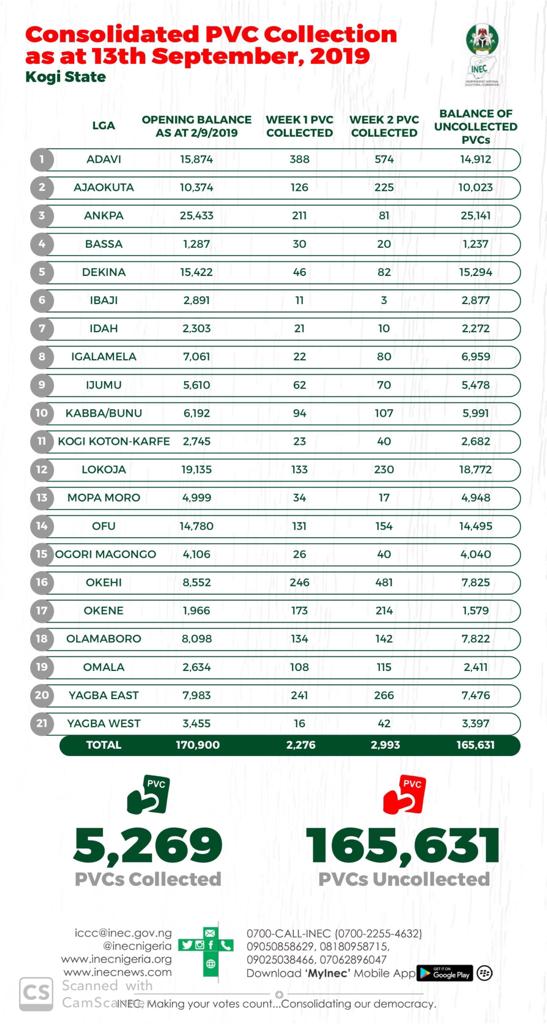 Kogi
The Independent National Electoral Commission (INEC) said it would be saving the country over N290 million for conducting both the Kogi West Senatorial District and the governorship election on November 16.

INEC Chairman, Prof. Mahmood Yakubu, disclosed this at the commission’s quarterly consultative meeting with political parties in Abuja, on Tuesday.

Yakubu said that the senatorial election would have cost the country N300 million, if conducted as a stand-alone election.

He, however, said that conducting it same day with the governorship election would cost less than N10 million.

The INEC chairman also disclosed that the Brass I state constituency election, holding in six polling units in Bayelsa, would also be conducted on the same day with the governorship election.

According to him, INEC has already made arrangements for the elections.

“In the case of Kogi West, it is a whole senatorial district that the Election Petitions Tribunal and the Court of Appeal had nullified the election conducted on February 23 and ordered INEC to conduct a re-run.

“By coincidence, the judgement of the Appeal Court came very close to the governorship election. So, the commission decided to combine the election with that of Kogi West Senatorial district.

“As a standalone election, the senatorial district election in seven local government areas of the state would have cost the nation over N300 million.

“We have to get ad hoc staff, make arrangements for transportation, accreditation of observers and also the cost on the part of the political parties and others.

“But because we are combining the election with that of the governorship, it is going to cost the nation less than N10 million, instead of over N300 million.

“So, the commission decided to combine the two elections in order to save cost and for convenience,’’ he said.

Yakubu appealed to political parties to advise their candidates and supporters to shun hate speech, inciting statements, physical attacks on opponents, destruction of electoral materials and other violations of the Electoral Act.

The Bloodstains at Lekki Tollgate, By Olusegun Adeniyi