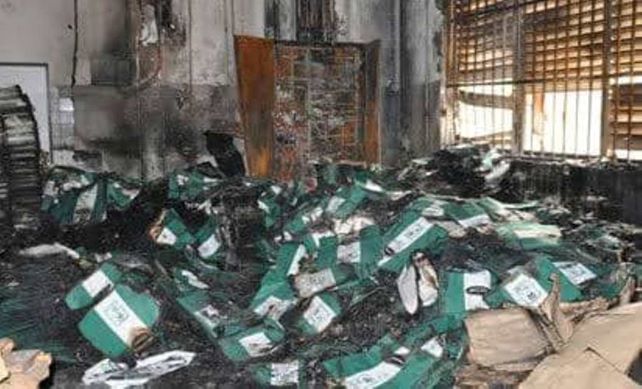 The Peoples Democratic Party (PDP) on Friday restated its demand for a forensic investigation into the fire outbreaks in the Office of the Accountant General of the Federation, the Cprporate Affairs Commission (CAC) and the Independent National Electoral Commission (INEC)

The main opposition party in a statement by its National Publicity Secretary, Kola Ologbondiyan, expressed shock over the disquieting fire disaster at the head office of the Independent National Electoral Commission (INEC) in Abuja, on Friday, in which valuable equipment and documents related to electoral and political party monitoring were destroyed.

The party said the recent spate of fire outbreaks at key Federal Government agencies and departments, particularly in Abuja, the nation’s capital was alarming

The party described the situation as unsettling, recalling that only last Wednesday, the headquarters of the Office of the Accountant General of the Federation in Abuja was gutted by fire, followed by another inferno at the head office of the Corporate Affairs Commission (CAC) just two days ago.

“Our party is deeply worried and hopes that this spate of fire outbreaks is not a coordinated design by sinister elements against demands for due process and accountability in our country, as already being insinuated in the public space,” Ologbondiyan said.

The PDP also charged the Federal Government to immediately ensure necessary precautionary and security measures to safeguard all Ministries, Departments and Agencies (MDAs) to avert such ugly incidences.

The party noted that the nation could no longer afford any more fire incident in key institutions as such would be distressing to the polity, “which is already under pressure occasioned by dwindling economy and the impact of the COVID-19 pandemic.”