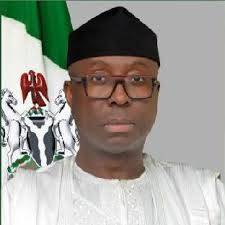 The Minister of Industry, Trade and Investment and one-time Governor of Ekiti State, Otunba Richard Adeniyi Adebayo, has said that his name should not be dragged into the governorship race of Ekiti State in 2022.
The Minister said he was not interested in becoming the governor, as he was currently being occupied by a national assignment as a Minister in the administration of President Muhammadu Buhari.
The Minister, who first governed Ekiti State between 1999 and 2003, made this known on Monday in a statement signed by his Special Assistant on Media, Mr Julius Toba-Jegede.
The Minister was reacting to the recent erection of some billboards across Ado Ekiti, the state capital, and other strategic locations across the state by some political groups, calling on him to join the race in view of what they described as his good leadership traits.
He said though he appreciated the various calls from the group and other pressure groups, he would rather be focused on his current assignment as a Minister of the Federal Republic of Nigeria.
The statement reads: “I am aware of the recent
development of people agitating for me to contest the governorship of Ekiti State in 2022.
“With every sense of humility and respect, I want to thank them for believing in me.
“However, I must state clearly that I am not interested in running for the office of governor of Ekiti State again.
“As a leader, it was a privilege to serve Ekiti as its First Executive Governor where I did my best leaving behind verifiable legacy projects.
“My interest now is to continue playing my leadership role of ensuring that our dear state is peaceful, well governed and to encourage the next generation of leaders to emerge.
“At the federal level, I am currently engaged with the responsibilities of my office as a Minister and how to ensure that the economic diversification goals of President Mohammadu Buhari for the country are achieved during this second term.
“‘At all times, I will be available to offer my advice, support and encouragement to all Nigerians who are serving and those who crave to serve in various capacities, especially those of Ekiti extraction.”
Please follow and like us:

US condemns execution of humanitarian workers in Borno

APC can be destroyed by its crisis, party’s governors warn