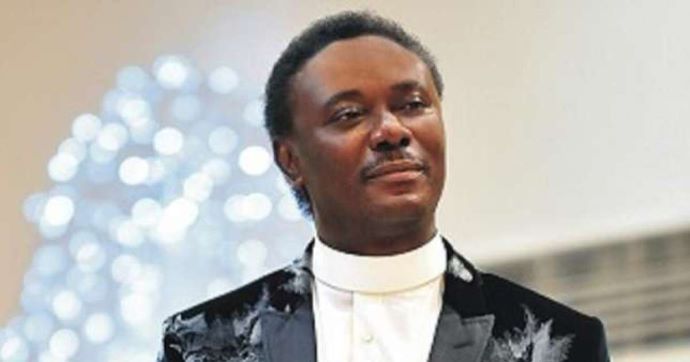 Pastor Chris Okotie, the Founder and Senior pastor of Household of God has denied rumours that he died yesterday in his Lagos home.

According to some media reports media manager to Pastor Chris,  Pastor Ladi Ayodeji quotes his boss to have said, he is alive, hale and hearty. Pastor Ayodeji, described the rumour as sad.

According him, Pastor Chris said his wife drew attention to the story and by the time he checked he discovered that the Pastor who died was another Pastor Okotie in Delta and that it had nothing to do with the wordsmith at the household of God.

According to the image maker, he spoke with the maverick Pastor at about 11.00 PM last night, “so that story is a figment of the imagination of some journalists for whatever ulterior motive.”

He promised to issue a rebuttal after a meeting Pastor Okotie shortly.

Recall that a Pastor was allegedly smuggled into a private hospital in Sapele, Delta State on Saturday.

The Pastor, Wilson Okotie, Senior Pastor, High Impact Christian Centre, located along Akintola Road, Opposite Ita Lane, Sapele, Delta State, was said to have fallen sick on Thursday night and was taken to a clinic in Warri, from where he was again referred back to the clinic in Sapele.

The late pastor was said to have died at about 6:40 pm while awaiting evacuation from Treasurehold Specialist Hospital along Ugbeyiyi road in Sapele, where he was admitted and been secretly managed against COVID-19 protocol.

Dr Richard Ikwuogu, who was leading the Delta State Ministry of Health Epidemiology inspection/monitoring of health facilities, and incident manager of Covid-19 response team, on Monday, on a tip-off had stormed the hospital premises, where the deceased was admitted and sealed it, after finding out that two patients were being treated for Coronavirus.

It was learnt that the ambulance that came to evacuate the remains of the suspected COVID-19 patient was attacked by some persons suspected to be the late man’s family members.

According to a source who spoke to newsmen on anonymity grounds, “They attacked the ambulance that came to remove the corpse, threatening to burn it, maybe they were angry that the health status of their brother was revealed.

“The driver escaped with the ambulance and as I speak to you the chairman is making arrangements with the security agencies to send the team back,” he said.

Onyeama appeals to embassies over growing cases of kidnapping

Buhari denounces killing of Greenfield University students, says it is a...