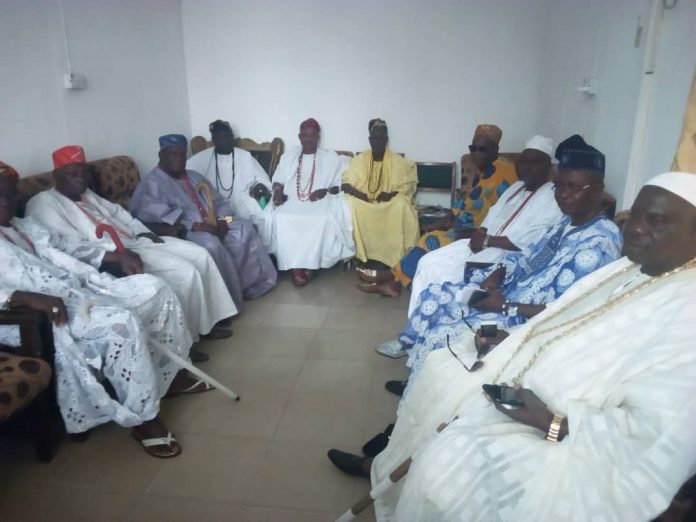 By Richard Akintade, Osogbo
Kingmakers of House of Oduduwa, Ile-Ife, in Osun State, have denied involvement in illegal mining activities in Ile-Ife and its environs as they described the allegations being bandied in the social media, in recent times, as malicious, baseless and unfounded.
Speaking with journalists, on behalf of the Sixteen Kingmakers,  the Lowa Adimula of the source, Oba Adeyeye Adekola Abraham, said the allegation was an attempt to bring the house of Oduduwa into disrepute and public ridicule.
Oba Adekola maintained that the Ooni of Ife, Oba Adeyeye Ogunwusi Enitan, Ojaja 11, had forbidden the traditional Chiefs from getting  involved in mining business, saying their involvement would be misconstrued as self-centred and abuse of privilege.
He implored well-meaning individual and prominent sons and daughters of Ile-Ife to ignore the allegations as he described the  allegations as conspiracy and handwork of some disgruntled elements who were hellbent on soiling the image of Ooni of Ife, Oba Adeyeye Ogunwusi Enitan and his traditional chiefs.
The Lowa Adimula of the source urged those who were behind the publication to come up with concrete evidence that suggested that traditional chiefs were involved in mining business.
He pointed out that the Traditional Chiefs could no longer tolerate unfounded allegations and blatant lies against their persons and offices.
Oba Adekola noted that since five years ago when Ooni of Ife, Oba Adeyeye Ogunwusi Enitan ascended the throne of his forefathers the ancient community had witnessed unprecedented development hence the need for sons and daughters of the source and Yoruba land in general to always respect the foremost traditional rulers.
He warned those behind the fabricated stories  to put an end to the allegations or face full wrath of the law and curse from the house of Oduduwa.
Oba Adekola called on the sons and daughters of Ile-Ife to continue to support Oba Ogunwusi in his quest to transform the ancient community which he identified as cradle of civilization and source of universe to modernity.
He however appealed to media influencers to always verify their facts and figures before going to press to avoid rancour and acrimony in the community.
Oba Adekola sued for peace in the community, saying sons and daughters of Ile-Ife must always work for progress and development of the community.
Please follow and like us:

Nnamani: Xenophobia is a dangerous phenomenon

No die-hard Boko Haram insurgents reintegrated into the society, says the...

Aregbesola did not receive salary in eight years as Osun Governor

How FG is prolonging the strike – ASUU President