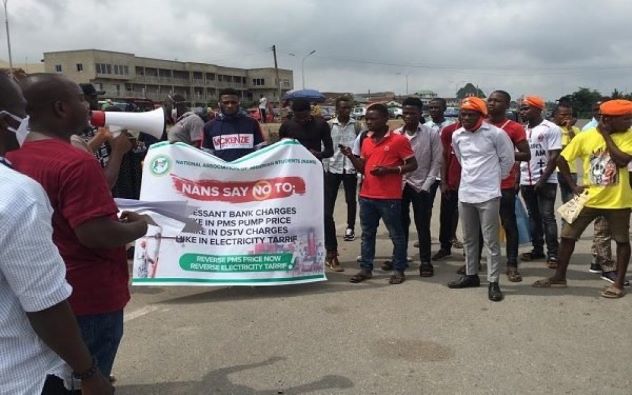 The National Association of Nigerian Students (NANS) on Tuesday gave the Federal Government a three-week ultimatum to reverse the increment in petrol pump price, electricity tariff among others, stating that the students would stage another protest on October 1st, 2020 if the government failed to grant their request.

According to our Correspondent in Osogbo, the protest was organised by NANS in collaboration with Joint Action Front (JAF) and Amica Ideological School Movement ( ACIS-M).

Some members of NANS and other human rights groups in Osun during the peaceful demonstration expressed their grievances through protest against incessant bank charges as well as hike in PMS pump price, cable network, and electricity tariff in Nigeria.

The protesters who held placards bearing inscriptions such as “We condemn the insensitivity of Buhari-led government to take current hardship faced by Nigerians. Palliatives, not inflation!” “Reverse PMS price. Reverse electricity tariff. Don’t ruin our democracy.” were seen along Olaiya road, Osogbo on Tuesday morning.

One of the stakeholders, Kola Ibrahim, who is the Secretary of JAF, said, “Our aim is to resist all anti-people policy of the Buhari government and its surrogates across the states.

“If we allow these policies to be implemented, we are going to lay a basis for the ruling class to continue to attack our economic rights and democratic rights. It is for this basis that the Nigerian students have risen to say no to all anti-people policies, no to capitalist policies.”

While noting that Nigeria had no functional refinery despite being the eight largest oil-producing country, Mr Kola lamented the government’s passivity in building refineries or revamping the existing ones.

He said, “You can imagine that in Nigeria, a country that has crude oil, the eighth biggest oil producer in the world does not have one functional refinery. In June 2020, Nigerian government spent up to hundred billion naira on NNPC but NNPC did not produce just single petrol. South Africa does not have crude oil, but they have refineries.

“Buhari’s government has been in government for more than six years, it takes less than two years to establish a refinery Even the existing ones have refused to revamp them.

“They are solidarising Dangote to build his own private refinery. They want to destroy the public refinery and bring in private refineries the same way they destroyed public education for private education. They are doing the same thing in the health sector. They don’t care about us.

“We can only care about ourselves by mobilising ourselves and building and destroying that political corrupt structure that they have built, and it is on this basis that I wanted to commend the Nigerian students. We must know that number is important, but number is not the only important factor. The quality of number is also another important factor. We are the seed of the revolution now.”

Also speaking, the convener of JAF, Comrade Alfred Adegoke, who supported the cause of the students, said, “This struggle has just started. We must stop it. The president has said that petroleum is going to N300, are you prepared to pay that? If we accept that today, education will be more commercialised. Electricity, you can’t buy. House, you can’t buy. Food, you can’t
buy. Government cannot provide water, houses or job. That is the mess we have been seeing. Irresponsible government all the time. We say no that this must end.

Echoing a similar view, the Coordinator of ACIS-M, Comrade Akin Asifat ,noted that Nigerian students are prepared to take the future in their own hands, adding that it was time to let the government realise that Nigeria belonged to all Nigerians.

He also called upon other bodies to support the move to resist the anti-people policies of the Buhari-led government while maintaining that the government had failed in its promises to provide social welfare for all the citizens.

In his words, “Nigerian people, the poor working masses with Nigerian students are ready to take the future in their hands and say enough is enough. There is no aspect of the economy in Nigeria that the poor can hang their head. Electricity in Nigeria hike, fuel price hike, stamp duty.

“Everything in Nigeria is poor. It is time for us to say it loud and clear even when you are enjoying crumbs from the table of those at the statehouse over there. We have to let everybody know that nobody is safe in this kind of noxious, wicked, anti-people policy of the most corrupted capitalist government of Buhari.

“This is just a prelude, an introduction to the big show. We shall decide on the streets. We are resuming back to the barricade. We would show the government that this country belongs to every one of us. You can’t kill us before our death comes. We will resist the anti-people policies.

“We can’t do this in isolation. TUC, NLC, they have not said anything. And we know the meaning of that silence. Silence has a meaning. If they don’t want their people to stamp them to death on the street, they have to come out now and issue a statement.

“Join the champ, join action fronts for Nigerians to mount well-compressive and coordinated programmes that will give a fightback to this government of the looters and bodyguards of Buhari-led APC.”

Nigeria In Need of Ethical Journalism Practice, By Emmanuel Ajibulu

“No specific and credible threats” against NYC ahead of 9/11 anniversary,...

Olaiya Flyover: Should we spill more blood? By Funke Egbemode

Chinese loans: PDP turning the facts on their heads, By Joseph...