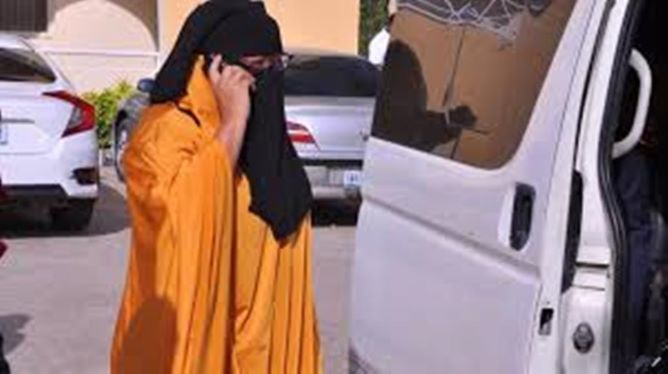 By Bode Olushegun
A prosecution witness, Olaleye Isma’il, on Monday, told a Borno State High Court, sitting in Maiduguri that Aisha Wakil (popularly called Mama Boko Haram) connived with two others to divert N111.7 million contract funds.
Mama Boko Haram, the Chief Executive Officer and founder of Complete Care and Aid Foundation, is currently facing a five-count amended charges of fraud alongside the Programme Manager and Country Director, Dahiru Saidu, and Prince Lawal Shoyode before Justice Aisha Kumaliya.
Isma’il, an investigator with the EFCC, while being led in evidence by Benjamin Manji, told the Court that as part of investigations into the fraud allegation, a forensic examination became necessary to analyse the Samsung devices of the three defendants.
He said: “They consented and voluntarily submitted their devices for forensic examination in a written statement.
“They further signed an attestation form, and later, we wrote a letter to Forensic Department, EFCC Abuja and submitted along with the five devices.
“On the 30th of January, 2020 we received a response from the Forensic Section and the following were obtained: a forensic report, compact disk, and all the five Samsung mobile devices belonging to the three defendants.
“We have discovered that, there folders containing appendixes which contains extracts on Whatsapp data extracted from the phones of the defendants.”
Testifying as the seventh prosecution witness, PW7, Isma’il further gave evidence as to the findings of the investigating team.
He said: “On the three contracts investigated as alleged by Nyeuro International Limited, the first one bordered on a purported contract to pay the sum of N45million into one Saidu Mukhtar Hospital Equipment account as directed by the defendant.
“The second purported contract was that, Nyeuro was directed to pay into Tahiru Saidu Daura’s account the sum of N1.650m for the supply of a machine. Investigation revealed that, there was no such contract.
“Also, Nyeuro International Limited was directed to supply white beans worth N66million, which was supplied to Complete Care and Aid Foundation’s store, to which the defendants acknowledged.”
The investigation, he said, further revealed that the amounts paid by contractors in the account of Mukhtar’s account domiciled in UBA, were used in paying other contractors that the Foundation was indebted to.
He told the court that in the course of interrogation, the second defendant, admitted in his statements that such a method of payment was termed “recycling”.
According to him, though Wakil and Shoyode had denied knowledge of the said contracts, the forensic analysis showed that they were actually communicating in this regard on Whatsapp, and they all agree on the “recycling”.
Earlier in the course of proceedings, Geoffrey Okomorah, a digital examiner and Head of Digital Forensics at the Department of Forensics and Crimes Laboratory Science, EFCC, testified as the sixth prosecution witness, PW6.
Giving his evidence-in-chief, he noted that the profile account of Wakil was used to communicate with all the defendants via Whatsapp.
He said: “On November 22, 2019 a letter of request for forensic examination of five Samsung digital devices were sent to the laboratory via letter of request from Counter Terrorism and General Investigation, CTGI Unit, Maiduguri Zonal office.
“It’s a case of criminal conspiracy, breach of trust and obtaining money by false pretence reported to the EFCC against the defendants.
“The request was to extract Whatsapp chats among the defendants.
“The three Samsung Galaxy Phones and two Galaxy tabs belonging to the defendants were physically examined and documented on the case file.
“The SIMs were removed from the phones by using the universal Forensic Extraction Device into one terabyte Toshiba hard drive.
“At the end of the process, the data extracted into the Toshiba hard drive was inserted into the HP 74 computer System using the physical analyzer.
“The data in the hard drive was processed into readable data; an examination of the data was done, and there was no Whatsapp messages recovered from the phones.
“In view of that, the Whatsapp messages were accessed manually with the aid of Universal Extraction Device and Camera which was snapped shot and the five devices were captured from the device and saved into the Toshiba hard device.”
The witness further explained that the Whatsapp messages recovered were grouped to form appendixes to form the report, with the data written on the solid disk of 4.7 gigabyte and a case number assigned to it.
The request sent by the Department of Forensics and Crimes Laboratory Science to CTGI, were afterward admitted by the Court as exhibit R and the two tablets as exhibits S1 and S2, while the phones were marked exhibits T1-T3, with the DVD of 4.7 gigabyte and the digital forensic reports admitted as exhibits V and U, respectively.
The prosecution, thereafter, closed its case against the defendants.
Please follow and like us:

Shonekan’s legacies of patriotism, patience will live on – Governors Forum

Lalong will complete N29bn legacy projects before May 2023, says Commissioner

Iyorchia Ayu: How PDP plans to rescue and rebuild Nigeria