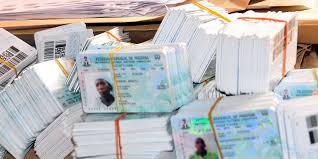 The Independent National Electoral Commission (INEC) said that 201,143 Permanent Voter Cards (PVCs) had yet to be collected in Kogi and Bayelsa as of September 20.

The commission disclosed this on Thursday in a progress report on PVC collection, which it started on September 2, ahead of the November 16 governorship elections in the two states.

The breakdown of the figure in an infographic report entitled: “Consolidated PVCs collection as at Sept. 20” showed that 163,856 PVCs are yet to be collected in Kogi, while the commission was still in possession of 37,287 cards in Bayelsa.

The reports made available to the News Agency of Nigeria (NAN) revealed that so far 7,044 PVCs were collected in Kogi within the first three weeks out of 170,900 uncollected cards in the state.

The report, which was broken down per local government in each state, also revealed that in “Bayelsa 10,206 cards were so far collected within the same two weeks, out of 47,493 opening balance of uncollected PVCs as at September 2’’.

The collection of PVCs will continue until September 30 in the two states.

Magnus Onyibe launches a book on public administration in Nigeria