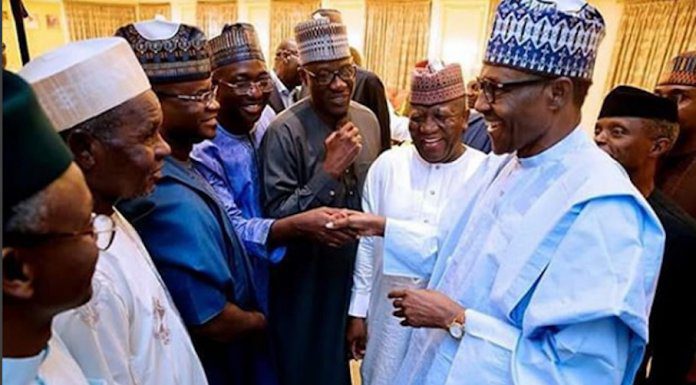 Worried by the intractable problem of fuel subsidy, which has affected the amount of money available for distribution among the three tiers of government, governors of the 36 states of the federation are mulling presenting to the federal government a demand for their shares and those of the local governments from the Federation Account to be given to them in dollars.

One of the governors confided in THISDAY at the weekend in Abuja that their efforts to resolve the issue so far has failed to yield any positive result due to pushback from some federal government officials, who believed a full deregulation of the downstream sector of the oil industry, which would lead to uncapping petrol price would be injurious to the poor, whom President Muhammadu Buhari has vowed to protect from the vulnerabilities of the nation’s economy.

Expressing concern on the deleterious effects of fuel subsidy on states’ finances, the source said given the negative reactions so far from the federal government on their advocacy for fuel subsidy removal, states have no choice but to think out a new strategy to deal with the knotty issue.

According to him, states would get better value for their shares from the Federation Account if federally-collected revenue, such as oil is distributed in the currency they are collected.

Data from the Central Bank of Nigeria (CBN) showed that in 2018, Nigeria netted a total of N5.54 trillion from oil revenue. That is about $18.1 billion when converted at the official exchange rate of N305 to $1.

A breakdown of the figure showed that the N5.54 trillion revenue was earned through three major oil revenue sources, which were crude oil/gas sales, petroleum profit tax/royalties and others.

Also, the immediate past Managing Director, International Monetary Fund (IMF), Ms. Christine Lagarde, while calling on the federal government to remove fuel subsidy during the joint annual spring meetings with the World Bank in Washington DC last April, had said that Nigeria had spent $5. 2 trillion from 2015 till then on fuel subsidies and the consequences thereof.

Between January and November 2018, the Nigerian National Petroleum Corporation (NNPC) in a document presented to the Federation Account Allocation Committee (FAAC) in December 2018, said it incurred N623.16 billion in 11 months under its under recovery programme, the new name it gave fuel subsidy to beat the lack of legislative approval for the expenditure as demanded by law.

On how feasible the idea of states and local governments being paid their shares of revenue from the Federation Account in dollars is, given the fact that not all in the money that come to the central basket is earned in the United States’ currency, the governor said the idea was at an infant stage but they would get around to working out the modalities to make it achievable.

He added that many states are in financial straits due to the fluctuation in earnings from the Federation Account, occasioned by oil price volatility and fuel subsidy as well as challenges of boosting internally-generated revenue.

The poor financial states of the second tier of government, he said, had impaired the ability of governors to deliver on their electoral promises and to providing other services to improve the welfare of the people.

Fayemi, while fielding questions from journalists in Lagos, faulted the directive by NFIU barring banks from allowing transactions from the SJLGAs without monies first reaching the LGAs account.

The governor said the directive was not backed by the 1999 Constitution.

He described Nigeria’s federalism as a two-tier system and not the widely held and generally accepted view of a three-tier federation, comprising federal, state and local governments.

He said there was no law in Nigeria to give local governments autonomy from the states.

The NFIU in a directive in May, had barred banks, governors, financial institutions, public officers and other stakeholders from tampering with local governments’ statutory allocations from the Federation Account.

It also threatened to deal with individuals and companies abetting the diversion of local government funds with local and international sanctions.

But Fayemi described the NFIU’s position as illegal, saying the NGF’s position on the directive to banks was informed by the understanding of the  position of the constitution on the issue of local government autonomy.

Describing the process needed to give local governments autonomy, Fayemi said though attempts had been made to amend the constitution, none has ever got the consent of 24 out of 36 Houses of Assembly to make it legal, in accordance with the provisions of the 1999 Constitution.

“If you want to have 200 local governments, it is your business; you and your people in your states should figure it out. It should not be the business of Abuja. That for me is a surreptitious unitarism.”

Also citing Section 162 of the 1999 Constitution, Fayemi queried the business of the NFIU with states and local governments’ joint accounts.

He cautioned the agency to comply with those standards on combating money laundering and not dabble into matters that are both constitutional and beyond its purview.

The governor added that local governments are not reporting entities and are therefore not under the NFIU in the manner contemplated by the agency’s so-called guidelines.

“You cannot go behind to do what the constitution does not allow you to do and that was what informed our position at the NGF over the ridiculous instruction to banks. You know that you cannot confront us; you are now going to bankers. What is the business of the banks with the accounts maintained by local government as long as the accounts are funded and the proper persons run the accounts?”

“When you read the NFIU law, the NFIU monitors what is going on in the banking system, internationally and locally. If you have a specific case of money laundering, by all means bring it up; but you can’t have a general rule to address a unique problem. Because you say you want to fight money laundering, you’ll now say that states cannot run joint accounts. Joint account is in the constitution; Section 162 is very clear,” the governor said.

Aftermath of death of Chad’s President: Fear of influx of weapons...

Father of Dowen College student: I won’t bury my son until...

FG-State VAT Conundrum may cause cut in salaries and bonuses of...

DAF truck kills two persons, injure 15 others in a crash...