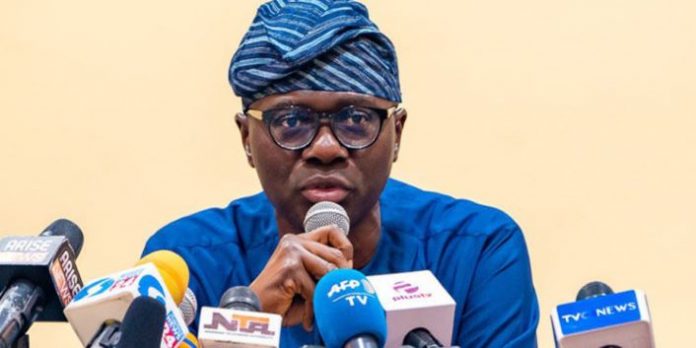 Signing the executive order at the Lagos House, Ikeja, Sanwo-Olu said that rebuilding the state was necessary, due to the huge destruction witnessed during the mayhem that followed recent EndSARS protests.

The governor also constituted an eight-member Lagos Rebuild Trust Fund Committee to oversee the rebuilding of every aspect of the state and also look at the future and healing of Lagos.

He said that in the last few weeks, the state government had been inundated with local and global offers of assistance to rebuild the state and recover all that were lost to arson and violence in the month of October.

According to him, it is obvious that the government can no longer wait to begin the onerous task of reconstructing Lagos State.

“In the next few days, our government will send a bill to the Lagos State House of Assembly for the Establishment of a Trust Fund to Rebuild Lagos.

“However, with the deluge of offers of immediate help and assistance that we have received locally and internationally, we can no longer wait until the bill is passed. It is expedient that our enumeration, recovery, and rebuilding efforts start as soon as possible.

“Therefore, by the power vested in me as the Governor of Lagos State, I will today sign an Executive Order to set up an eight-man Lagos Rebuild Trust Fund Committee, which will as a matter of urgency begin to oversee our recovery process.

“As I sign the Executive Order today, I am positive that we will attain new heights of development, we will build more resilient systems, we will become more united and accomplish our audacious goals and visions for Lagos State.

“I assure you of the committee’s utmost commitment to the reconstruction and upgrade of our dear state. In these challenging but interesting times, we realize that we have the potent opportunity to reform our state, and upgrade our structures,´´ Sanwo-Olu said.

According to him, the government has decided to put behind it the recent challenges and face the daunting task of collectively rebuilding the state.

“We believe that our culture, heritage, values and future are worth much more than the looting, arson and destruction, which we witnessed in Lagos State about two weeks ago.

“We have decided to look to the future with hope, as we work on healing the wounds of our recent past.

“Instead of wallowing in our pain, we have chosen to positively move forward. We will embrace new standards of governance; we will build stronger partnerships, stronger people, stronger institutions, and a stronger state.

“Our strength lies in our uncanny ability to overcome the most complicated challenges because we have people who genuinely love Lagos State and will assiduously do all they can to preserve its peace and unity,´´ he said.

The governor said that the committee would have a profound effect on how quickly and efficiently the state would be rebuilt and restart the socio-economic growth.

Sanwo-Olu said that when the Trust Fund Bill is passed by the House of Assembly and becomes law, the Lagos Rebuild Trust Fund Committee would be dissolved, and its functions would be immediately transferred to the newly established Trust Fund.

He said that Trust Fund Committee would be responsible for getting the detailed cost of restructuring and rebuilding the destroyed property, among other functions.

See What Buhari Has Done to Nigerian Air Force, By Femi...