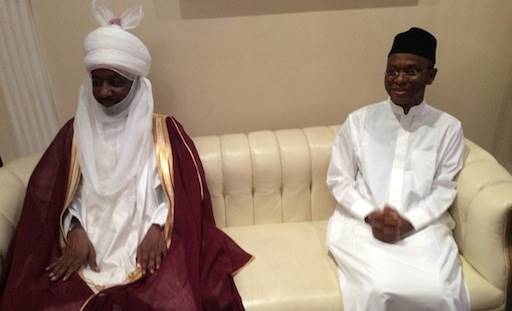 Indications emerged on Thursday afternoon that the Governor of Kaduna State, Malam Nasiru El-Rufai has travelled to Awe in Nasarawa State to visit the dethroned emir of Kano, Muhammadu Sanusi II, Daily Trust has reported.

Quoting security sources, the paper said that the Governor left Kaduna on Thursday morning to visit Sanusi, though it could not confirm this from the Governor’s Special Assistant on Media and Publicity, Ibrahim Musa because his phones were unreachable.

El-Rufai recently appointed the deposed Emir as the Chancellor of the Kaduna State University (KASU).

It was the second appointment for Sanusi from the Kaduna state governor within 24 hours. He was earlier appointed the Vice-Chairman of Kaduna Investment Promotion Agency (KADIPA) on Tuesday.

A statement signed by the Special Adviser to the Governor (Media & Communication), Muyiwa Adekeye, said that the deposed emir Sanusi II has consented to serve as Chancellor of KASU and as Vice-Chairman of the board of KADIPA.

The statement noted that Governor El-Rufai had no doubt that as Chancellor, the deposed emir would provide symbolic and substantive leadership in raising the profile of KASU as an emerging centre of learning on the national and global level.

“On behalf of the government and people of Kaduna State, Malam Nasir El-Rufai is delighted to appoint His Highness, Muhammadu Sanusi II as the Chancellor of the Kaduna State University. In public life, His Highness has demonstrated a strong commitment to education,” the statement reads in part.

It said the appointment came at an exciting moment for KASU which is transiting to a multi-campus structure with presence across the state, adding that Governor El-Rufai had conveyed the profound appreciation of the government to HH Malam Tagwai Sambo for the long years of distinguished service to KASU and the state.

Sanusi was dethroned as Emir of Kano  and banished to Nasarawa State last Monday by the Kano State Government. His lawyers are challenging his banishment in court.
Source: nationalaccordnewspaper.com

Gunmen burn down another police station in Imo state

Import index grows by 0.52% between July and September— NBS