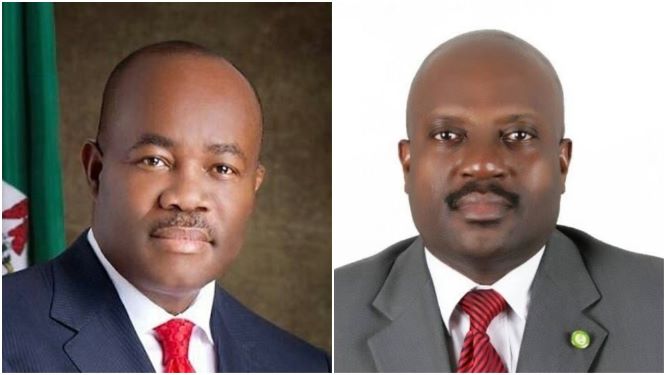 The   controversy over alleged illicit spending  spree  at the Niger Delta Development Commission (NDDC) has taken a fresh dimension as the acting managing director of the Commission under the Interim Management  Committee(IMC), Prof K.D. Pondei  has been plagued by allegations of  crooked monthly payment of a whopping  N51m to himself as  monthly Guest house imprest and purported visit to project sites for  “ project monitoring” during the lockdown occasioned by COVID-19 crisis.

Investigations by The New Diplomat reveal that  while the COVID-19  lockdown declared by president Muhammadu Buhari lasted, the acting MD of NDDC was collecting  a whopping  N51m monthly purportedly  for monthly Guest House imprest and  visit to project sites  for “ project monitoring”.

Recall that Buhari had ordered a lock-down in line with the advise of the NCDC(Nigeria centre for Disease Control) to prevent the spread of COVID-19.Many directors at the NDDC are miffed at this unfolding scandal, expressing shock why any person  would tend to behave in such a manner that is less   than honorable and ethical. According to them, this is  because at that time, nobody truly embarked on project inspection or monitoring at the NDDC.

Recall  also that Rivers State governor, Chief Nyesom Wike had similarly imposed a restriction on movements within  Rivers state during the lock-down  in a bid to stem the spread of the dreaded COVID-19 virus. It would also be recalled that during that period, inter-state travels in and outside  of Rivers State were prohibited by the State government, fueling concerns as to which project was then monitored.

Disappointed directors at the NDDC also wondered why Pondei should approve such a staggering sum of N51m for himself as a monthly Guest House Imprest, and related acts,  an act that runs foul of  laid down laws and protocols set forth by the Revenue Mobilization, Allocation and Fiscal Commission(RMAFC), the body statutorily empowered by Law to determine and set lawful remuneration for public office holders in Nigeria.

This development has fueled tension among  senior directors at the NDDC who now accuse  the acting MD of  illegally stripping the Commission and the peoples of the Niger Delta of funds meant for the  accelerated development of the region, and converting same into inappropriate use.

Said a senior director: “ Let the acting MD tell the presidency when he went on the  site visit when there was lock-down. It is really funny. Then also when you look at that voucher, he collects a huge N51m monthly illegally as Guest House imprest. Who determined that  amount? Was it RMAFC? What is the imprest of  a serving minister? What is the monthly salary of our president that an MD of an agency will now be collecting N51m monthly in very controversial ways…

“This is a  breach of the  RMAFC enabling laws which regulate the remuneration  of all appointed public officers of the Federal Republic of Nigeria. We are really shocked.…N51m! This amounts to about   $131,000,000  USD. How many presidents in the world earn that amount monthly? We are raising serious petitions to the presidency to show them how Pondei and his group have continued to illicitly expend the resources of the NDDC   under the guise of various false claims.”

Sources indicate that this move may have triggered a fresh crisis at the NDDC.  A scrutiny of a copy of March Voucher for April disbursement show that the payment didn’t go through any rigorous process of evaluation neither was there an explanation as to why the acting MD would pocket such hefty sums in the name of project monitoring in April when there was a total lock-down on account of COVID-19 crisis.

More worrisome was the fact that the staggering sum of N51m which amounts to about $131,613, 36 USD when converted into United States Dollar, using Universal currency converter,  far in excess, quadruples the monthly salaries and official allowances  of many Heads of  Governments  across the World including that of Nigeria’s president Muhammadu Buhari.

In fact, President Buhari’s  official salary and allowances  as determined  by the Revenue Mobilization  Allocation and Fiscal Commission(RAMFC) is  N14m yearly, based on data sourced from the RMAFC’s official data base. This was established by the RMAFC since 2015 when President Buhari was first elected president.

According to the data obtained from the RMAFC website, which was determined by the Commission as the president’s annual statutory salary and allowances , Buhari earns N14m yearly. The president is  also entitled to inclusive allowances such as Hardship, Consistency, etc.

The RMAFC is the body  statutorily empowered by Law in accordance with section 32(d) of part 1 of the Third Schedule of the Constitution  of Nigeria to determine the  lawful and acceptable  remunerations for public office holders in Nigeria.

Just like in Buhari’s case, the official  yearly remuneration of the Prime Minister of Norway is put at $210,714.USD. This implies that the  PM of one of the richest countries in world with over  $1 trillion USD Sovereign Wealth Fund , Norway, earns about $19,000 USD monthly while NDDC’s acting MD, an agency of government supervised by a ministry or directorate in Nigeria inappropriately  approves about  $131, 613,36 USD monthly to himself.

When The New Diplomat  contacted the RMAFC  Office for clarification about the N51m monthly imprest of the acting NDDC MD, the Commission said it was clearly unaware of such a determination and approval. At the NDDC no one was willing to speak on the matter. Efforts to reach Pondei himself were equally unsuccessful as his official line was constantly switched off.

Renewal of resident permit in Nigeria is now with proof of...

Intra and inter-State border clashes in more than 20 states persist...

Ozekhome has good things to say about T.B. Joshua that set...