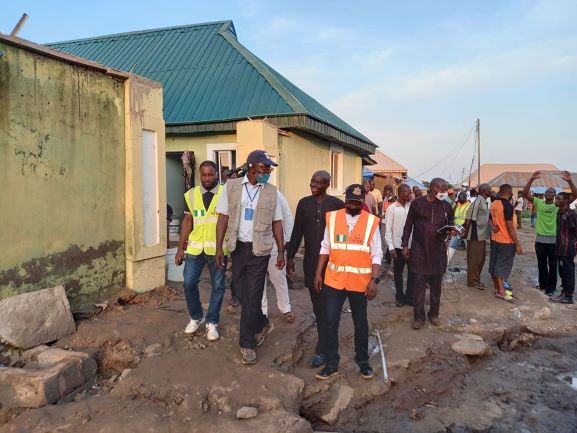 The National Emergency Management Agency (NEMA) has inspected areas affected by the flood incidence that occurred at the weekend in Gwagwalada Area Council of the Federal Capital Territory to ascertain the extent of damage caused by the disaster.

The Director General Air Vice Marshal Muhammadu Muhammed (rtd) was represented by NEMA’s Director of Planning Research and Forecasting Kayode Fagbemi who led the 2020 Flood Preparedness, Mitigation and Response Committee of the Agency.

The NEMA team visited some of the locations affected by the flood along with staff of Federal Capital Territory Emergency Management Agency led by the Deputy Director Forecasting, Response and Mitigation Mrs Florence Wenegieme.

The DG NEMA sympathised with the affected persons and advised persons living in flood proned areas to take the early warning alerts seriously and evacuate to safer high grounds. He also warned against blockage of drainages and urged that they must be cleared immediately to avoid urban flooding.

He added that the Gwagwalada incidence and similar occurrence in other locations over the weekend have confirmed the need for urgent actions to safeguard against the predicted probability of flood in different parts of the country.

Almajiri: What Happened On the Road to Heaven?

Ukrainian and Russian troops fight on streets of capital Kyiv