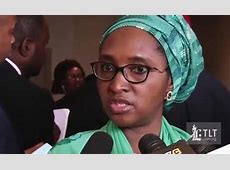 The Minister of Finance, Budget and National Planning, Dr Zainab Ahmed on Wednesday presented a report to the Federal Executive Council, showing that the Nigeria’s Gross Domestic Product (GDP) contracted by 6.1 per cent.

She added the economy showed some resilience compared with other economies around the world.

“The GDP report shows that the economy went into negative growth of -6.10 per cent in the second quarter but that the aggregate performance for half year 2020 is -2.1per cent.

“This performance of -6.10per cent is a good performance in the sense that it is better than what we have projected second quarter performance to be at -7.2per cent.

“This performance also is a good performance because it outperformed the projections that had been done by the Brentwood institutions but it also outperformed very developed economies of the world and also economies that are comparable to us.

“Similarly, the UK, Canada, Italy and several countries of the world all went into very significant negative growth,” she said.

The minister also noted that Nigeria’s economy had shown some level of resilience in this level of performance.

She said the ministry reported to Council that even though out of the 46 sectors of the economy, 30 of these sectors showed negative growth but there were still some sectors that were growing on the positive territory.

According to the minister, these sectors included agriculture as well as financial services and the ICT services.

“This is actually showing that even during the COVID-19 era, there were still some sectors that stood firm and indeed were growing.

“The inflation was also reported to be moving up gradually; capital Information did not dry up despite the lockdown and the difficulties all countries experienced.

“But this is reflected by the significant decline in capital importation into the country.’’

She said the exchange rate had moved up from 326 dollars at the beginning of the quarter to 367dollars.

“All of these are designed to ensure continuous economic activities help to stabilize the economy.

“We are lucky that these things were rolled out early reducing the impact of the negative growth,’’ she added.

President Buhari calls for end to violence against women, children

Nigeria to assemble solar cars by 2020

Buratai: Boko Haram crisis may linger for another 20 years