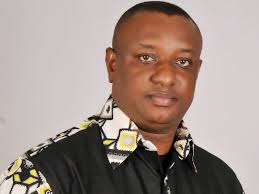 Minister of State, Labour And Employment, Festus Keyamo, SAN, has written to Guardian Newspaper to retract a portion of a publication which suggested he once prosecuted Minister of Niger Delta Affairs, Godswill Akpabio, for alleged graft.

The publication alleged that Keyamo was engaged at a time by the Economic and Financial Crimes Commission (EFCC) “to prove that the former governor is guilty of corruptly enriching himself from the till of Akwa Ibom State Government and people”.

However, in a letter sent to the Newspaper, the Minister said nothing can be farther from the truth as he had never been engaged at any time to prosecute Akpabio.

“My attention has been drawn to an article with the above-mentioned title [Crossing over from civil to political activism] which appeared at page 13 of The Guardian of Friday, September 27, 2019,” he wrote.

“In the said article, there was a clear factual inaccuracy when you suggested that I was engaged sometime in the immediate past by the Economic and Financial Crimes Commission to prosecute Senator Godswill Akpabio for alleged graft.

“Nothing can be farther from the truth. I decided to keep a dignified silence in the last few weeks when some mischievous and/or ill-informed individuals kept spreading that narrative in the social media.

“The reason is that I do not always bother myself to respond to factually inaccurate issues concerning me that are raised from sources that are not credible news outlets, no matter how intense the discussions or debates about those issues become in the social media.

“You can then imagine my shock when a supposedly respectable paper like The Guardian swallowed that narrative hook, line and sinker without the slightest effort at fact-checking.

“Even without searching on Google the cases I have prosecuted, a simple telephone call as a journalist to the spokesperson of the EFCC would have duly informed you that at no time was I ever engaged by the EFCC to prosecute Senator Godswill Akpabio and I never did.

“All the stories about that have been nothing but social media nonsense. As far as I can recollect, at no time was Senator Godswill Akpabio charged or arraigned by the EFCC in any court of law for any offence. So how come I was engaged to prosecute a non-existent Charge?”

Keyamo, therefore, asked the newspaper to retract that portion of the publication, saying he has “chosen to ignore all the other innuendoes and subliminal messages you sought to pass across in the said article without hitting the nail on the head”.

“Finally, I hope you will make this correction as prominent as you made the said article to dispel any suspicion that you intended some mischief,” the minister added.

Again Presidency slams NEF, says it is “quasi-organization” with no credible...