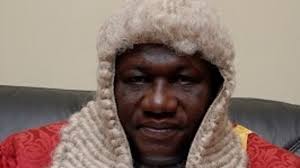 Media aide to the Chief Justice of Nigeria, Mr Ahuraka Isah, in a statement, on Monday, disclosed that Justice Garba voluntarily retired to enable him to take over as the Administrator of the National Judicial Institute, NJI.

According to the statement, the Board of Governors of the NJI under the chairmanship of the CJN, Justice Ibrahim Muhammad, had at a meeting they held on July 15, appointed Justice Garba to head the Institute.

The decision of the NJI board came barely 57 days after Justice Garba was sworn in as substantive CJ of the FCT High Court by the CJN.

The retired FCT CJ has already taken over from Justice Rosaline Bozimo, Retd, whose tenure as the Administrator of the Institute came to an end on July 31.

“Justice Garba, who was until his new appointment, the Chief Judge of the Federal Capital Territory High Court, has voluntarily retired to enable him resume at the Institute.

“He was sworn-in as the FCT Chief Judge on June 7 this year and would have been due to retire by October 10th this year when he would have attained the mandatory retirement age of 65 years.

“Born on October 10th, 1956, Justice Garba hails from Malumfashi Local Government Area of Katsina State. He was called to bar in 1984 just as he completed his National Youth Service Corps (NYSC) in 1985.

“It would be recalled that Justice M. A. Ope-Agbe, who was the Administrator of the National Judicial Institute from April 2000 to April 2003 was appointed from the High Court Bench, just as the late Justice O. Olatawura and Justice A. O. Obaseki came from the Supreme Court to head the Institute from 1991 to 1995 and from 1995 to March 2000 respectively.

“The appointment which takes effect from 1st August, 2021 is for three years, from the date of appointment”, the statement further read. (Vanguard)

Buhari to Youth: I recognise your right to peaceful protest, beware...

Why social media must be restricted — Bishop Oyedepo