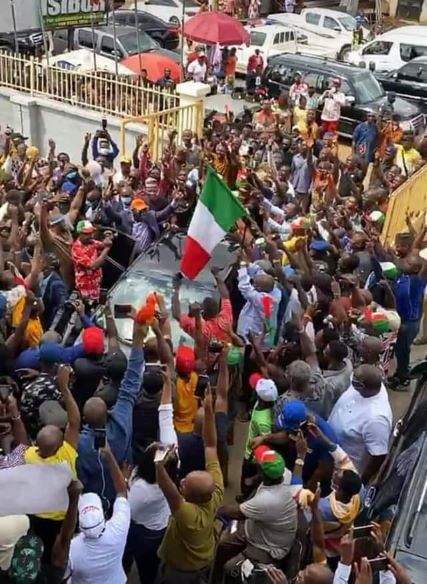 Pastor Osagie Ize-Iyamu Campaign Organisation on Friday called for quarantining of Governor Godwin Obaseki and all present at his defection rally for violation of social distancing rules and other health guidelines.

A statement by the Director of Communication and Media of the Campaign Organisation, John Mayaki, said Governor Godwin Obaseki exercised his right of assembly to join a political party by completing his defection to the PDP.

It however said in his usual autocracy and abuse of power, he tried to deny Pastor Osagie Ize-Iyamu last year when he returned to the All Progressives Congress through the sponsorship of physical and media attacks, and the institution of baseless court cases.

“While we note interestingly that this is the same right the Governor, in his usual autocracy and abuse of power, tried to deny Pastor Osagie Ize-Iyamu last year when he returned to the All Progressives Congress through the sponsorship of physical and media attacks, and the institution of baseless court cases, we, as democrats and staunch believer in the rule of law, unlike Godwin Obaseki, hold nothing against it.

“However, we observed with great concern the dangerous and reckless actions of the Governor and his supporters at the venue of his defection. Without any observance of the social distancing rules, or the use of face masks to prevent the spread of COVID-19, Mr. Godwin Obaseki assembled hundreds of Edo youths that his administration failed to gainfully engage following his failure to create 200,000 jobs as promised, and assigned them the demeaning task of singing his praises at great risk to their health during a pandemic,” the statement read.

It added that apart from violating the guidelines of the Presidential Task-Force on COVID-19 on social gathering, the Governor also openly disregarded the stipulations of his ill-conceived gazette which, among other things, held that no gathering of more than 20 persons shall take place in a single location.

The Campaign Organisation called on the Nigeria Police Force and other relevant security agencies to aid the Nigeria Center for Disease Control in the commencement of an immediate identification, tracing, and arrest of everyone present at the event for immediate quarantine at nearby isolation centers.

The Organisation added that failure to do so may put in jeopardy the integrity of the fight against COVID-19 and make a mockery of the efforts and sacrifice of frontline health workers and other important stakeholders.

Kwara to support Nigeria’s drive towards self-sufficiency in sugar

“Equipping the Nigerian Youth to take advantage of the COVID-19 pandemic...

Ganduje presents staff of office to Emir of Bichi