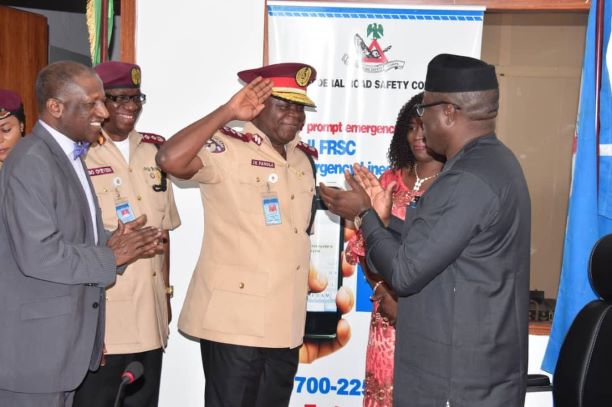 Ekiti State Governor and Chairman of Nigerian Governors’ Forum, Dr Kayode Fayemi, has described the Federal Road Safety Corps (FRSC) as an exemplary public institution that has impacted positively on the management of the Nigerian roads.

The Governor said Nigerians had much to learn from the organisation.

He stated this on Thursday during his courtesy visit to the FRSC National Headquarters, Abuja.

In a press statement issued by the Corps’ Head of Public Education, Commander Bisi Kazeem, the Governor was at the FRSC National Headquarters as a special guest at the decoration of Deputy Corps Marshal, Kayode Fanola, with his new rank.

Kazeem said the Governor commended the Corps Marshal, Dr Boboye Oyeyemi, for bringing his wealth of experience in road safety management to bear in his management of the FRSC.

This, the governor said, had impacted positively on the successes recorded by the Corps within the last few years of his leadership.

“The Governor lauded the various innovations introduced by the Corps to ensure that the Nigerian roads become safer and convenient for economic activities to thrive.

“While assuring the Corps of sustained support of the state governments to issues of road safety in the country, he stressed that all the States in the federation shared  the same value for human safety and security and would work assiduously towards the success of road safety programmes in the country,” Kazeem reported to have said in the press statement.

He said the Governor also noted that the inauguration of the National Road Safety Advisory Council (NaSAC), following the approval of the Nigeria Road Safety Strategy document, was novel in the campaign for safer road environment in the country.

Fayemi was also reported to have said that the initiative afforded governors ample opportunity to participate actively in policy formulation and execution of road safety programmes, even as he restated that the Governors would remain committed to the campaign to ensure road safety in the country through collaboration with the FRSC.

Thd governor, as further reported, particularly commended the FRSC for its massive investments in information and communication technology, saying the advancement made by the Corps over the years was fallout of its heavy reliance on technological tools.

The Governor, the statement added, applauded the initiative, noting that with the growing need for prompt dissemination of information on road conditions across the country and calls for emergencies, the need for the radio platform by the Corps could not  be overemphasised.

Governor Fayemi was said to have  promised to support the radio station to achieve its goals of publicising issues of road safety.

As part of the Governor’s activities at the FRSC National Headquarters, he was taken round the FRSC facilities including the Information Technology Centre and the National Traffic Radio studio before joining the Chairman of the FRSC Board, Mallam Bukhari Bello and the Corps Marshal to decorate the newly appointed Deputy Corps Marshal, Kayode Fanola, who is representing the South-West geopolitical zone at the FRSC Management.

No law barring Buhari from holding meetings in any sections of...

How DSS on Bichi’s watch is quietly delivering on its security...

A year in the saddle, Gambari remains consistently apolitical, By Sufuyan...