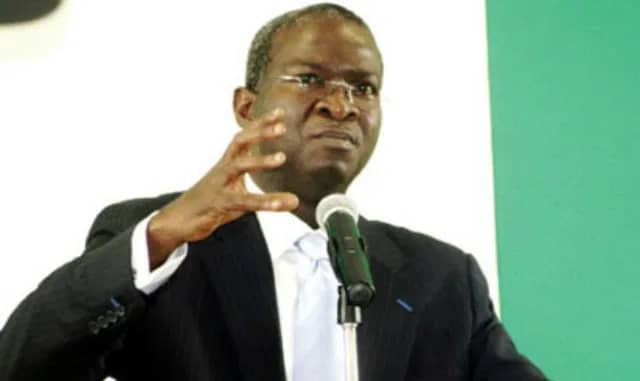 Minister Works and Housing, Babatunde Fashola, has defended the Federal Government’s resort to loans to expand infrastructure in the country.

Fashola, who spoke in Abuja at the NAN Forum, the flagship interview programme of the News Agency of Nigeria, said the country would not make meaningful progress without taking loans to boost infrastructure.

He said: “It is in our own interest that government does some borrowing and spends it on investment because that sector contributes to the Gross Domestic Products and contributes to employment.

“I do not support irresponsible borrowing, so let us be clear; there has to be some sense to this.

“So long as you are borrowing to invest and you are investing in assets, then we can have this debate from morning till night and I don’t think I will come out unsuccessful.

“I agree everybody must keep their eyes open about how money is being borrowed, what it is being used for and whether the debt is sustainable.

“We just delivered a rail programme through the Ministry of Transportation; that is a 100-year asset that you have got now.

“So some economists say wait until you gather the money, that’s bad economics.”

While pointing out that many developed countries created super economies through borrowing, Fashola said the recent loans obtained by the Federal Government would not mortgage the future of Nigerians.

He said: “We came from a background of colonialism where we were told that if you go borrowing you go sorrowing, so my parents and their generation told us never to borrow.

“But while we were not borrowing, those who led the rules started borrowing.

“The largest debtors in the world today are from the West.

“And you know what is happening, we go to use them and they charge us.

“So who is paying?

“I have heard people say they are mortgaging the future of people.

“As we are holding this meeting, one new baby has arrived.

“If you don’t prepare for him, you make that future bleak.

“As at the time we were building Lekki Bridge in Lagos, it was N29 billion.

“If we wait until he is about 30 to build that bridge, we can’t buy it at N29 billion anymore.

“So, if he contributes to paying for it, so be it because he started using it before he even arrived.

“So, those who said don’t borrow have changed their minds.

“They have set parameters of debt to GDP and within those parameters you play very well.

“And those who say so now, where were they in 2005 or 2006 when government paid out $12 billion in cash to go and buy up tent when the house is flooding.

“They took $12 billion in cash to go and write off debts that have been classified.

“The roads were bad then.

“The rail was not built.

“Lagos-Ibadan (expressway) needed to be built.

“But since the aftermath of going to write off that debt, we started borrowing again.

“So this administration did inherit all the debt.

“There is a sector of our economy called the financial services sector.

“If all of us put money in a bank and nobody is borrowing, that bank is going to fold up.

“So, if you have anybody in any venture capital, finance house, mortgage bank, it is because government is borrowing that they can pay their salary.

“So, borrowing is not a sin.

“It is part of the essence of keeping the economy growing and the armchair economists talking about public expenditure, for example, who have never run a government, must be careful what they feed to the public.” (NAN)

No relaxation of COVID-19 rules in Christmas season – PTF