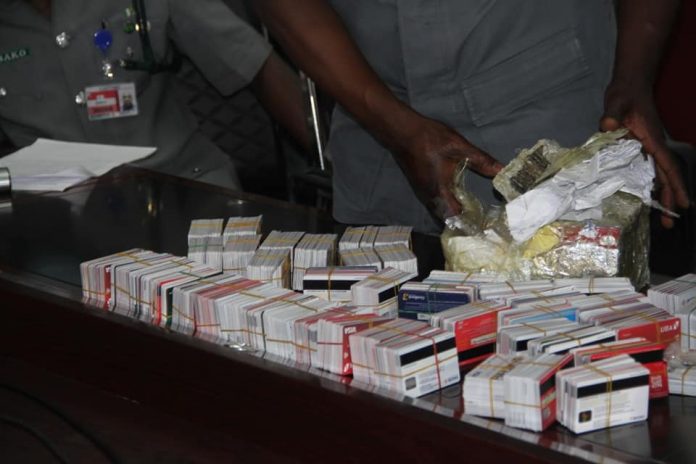 The suspect, Ishaq Abubakar, was handed over to the EFCC by the Nigeria Customs Service on Thursday, September 10, 2020, for investigation and prosecution.

According to a statement by the anti-graft agency, Abubakar got into trouble when he was arrested by officers of the Customs Service at the Murtala Muhammed International Airport, Lagos, on his way to Dubai with 2, 886 Automated Teller Machine (ATM) cards and four Subscriber Identification Module (SIM) cards carefully concealed in packs of noodles.

While handing over the suspect to the EFCC in Lagos, on Thursday, Deputy Comptroller, Enforcement, Abudulmumuni Bako, said: “Officers of the Nigeria Customs Service at the Departure Hall of the Murtala Muhammed International Airport, on August 22, 2020, intercepted the suspect with 2, 886 ATM cards and four SIM cards, which he carefully concealed in packs of noodles.”

Bako, who represented the Customs Area Comptroller, A. Ma’aji, added that “The suspect, who claimed to have come from Kano to travel to Dubai aboard the Emirate Evacuation flight , was seen with someone who was assigned to facilitate his movement through the airport checks.

“This raised the suspicion of the officers who insisted he should be physically and thoroughly checked after the scan machine had revealed he was carrying packs of noodles”, he said.

In his response, the Lagos zonal head, AbdulRasheed Bawa, who received the suspect on behalf of the Commission, assured the Service that the Commission would duly investigate the suspect and any other party that might be involved in the alleged criminal offence.

According to him, “ On behalf of the Commission and the acting Chairman, Mr Muhammed Umar, we have taken over Ishaq, and I can assure you that we are going to investigate the matter thoroughly and unveil everybody involved in the syndicate.

“There are a number of possibilities. There is an element of conspiracy, foreign exchange (FOREX) malpractices and money laundering.

Bawa also emphasized the possibility of the suspect being a member of a network, adding that “In recent months, we have observed a trend in which unsuspecting Nigerians are lured into opening accounts to be bought at a fee.

“Most bankers are not carrying out their duties with due diligence, particularly the Know Your Customers, KYC, procedural check.”

UK offers to work with Nigeria to end insecurity

Trump endorses rival to Republican who voted to impeach

N11.5bn fraud: Alao-Akala, others have case to answer, says Court