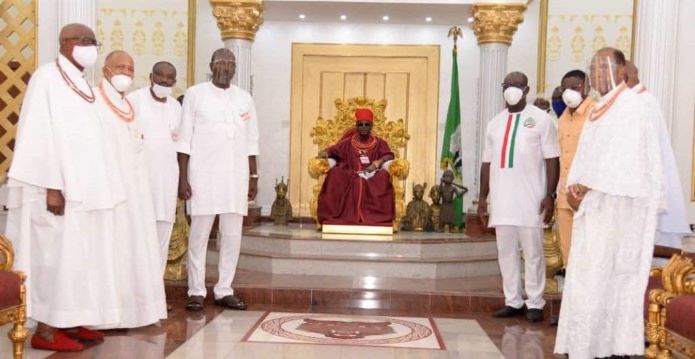 The party in a statement by the Secretary, Publicity Sub-Committee, National Campaign Council on Edo Governorship election, Kola Ologbondiyan, said their members and supporters across the state, assured Nigerians that as a law-abiding and well-known peaceful political party, “we had always and will continue to conduct our activities and campaign in very peaceful and orderly manner, which has endeared them to the majority of the Edo people.

“Indeed, our campaign and party members tremendously value the forthright admonitions, reprimands, counsel and direction by the royal father, which is a reinforcement of our party’s established and unwavering commitment towards peaceful electoral process, particularly in the Edo state governorship election, despite the provocations and unwarranted attacks.

“We are also elated by the charge on credible and issue-based campaign, guided by manifestos and geared towards the development of the state.

“We are happy because such has been the fulcrum and mainstay of our campaign, for which we command the followership of the overwhelming majority of the people of Edo state.

“Unarguably, ours has been a campaign established on the personal integrity and sterling performance of our candidate, Governor Godwin Obaseki, particularly his development programmes and projects in all critical sectors across the nooks and crannies of Edo state, for which the people are eager to re-elect him as their governor.

“Of course, with the overwhelming support for our candidate, Governor Obaseki, across the state, in addition to the fact that Edo has always been home to the PDP, our party and candidate do not have need of any underhand measure or resort to violence in this election.

“This is why our candidate, the performing governor of Edo state, Governor Godwin Obaseki and his deputy, Philip Shuaibu, have continued to receive rousing solidarity from all the segments of the voting population across Edo state, and the tide of the election is clear to all.

“Our commitment remains with the people of Edo state, who have continued to demonstrate their solidarity to Governor Obaseki in all our rallies as well as in always coming out enmasse to defend their state and their governor in the face of violent attacks by desperate undemocratic elements.

“Our National Campaign on Edo governorship election therefore restates our appreciation to the Oba of Benin for his timely intervention for a peaceful and credible election on September 19,” PDP said.

The party also urged all stakeholders to allow their actions to be guided by the admonitions of the Oba of Benin as well as other royal fathers in the state, before, during and after the election.

Covid-19 will not stop us from providing essential services- Aliyu

Blown Out Like A Candle In The Wind: A Tribute To...

Four subtle signs you’re not brushing your teeth correctly, and how...