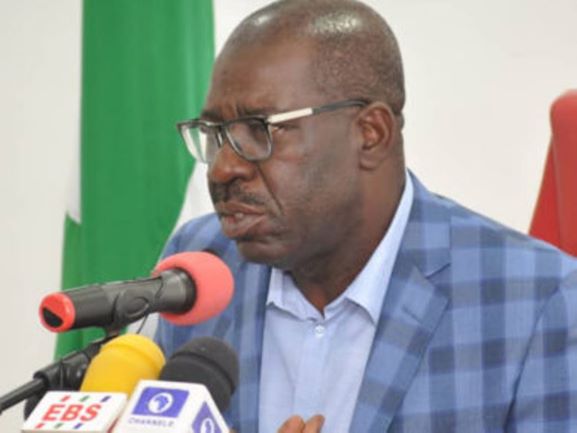 The Edo State Chapter of the All Progressives Congress has written to the Independent National Electoral Commission [INEC] detailing alleged plans by Governor Godwin Obaseki to scuttle the party’s primary election slated for next month in Edo State with inflated cases of COVID-19.
According to Mr. Lawrence Okah, the State Secretary of the party who signed the letter addressed to INEC’s Chairman, Governor Obaseki has instructed the testing of fictitious 300,000 persons with the ultimate desire to announce fake positive results to serve as a foundation for the scuttling of the party’s primary election scheduled to hold on 22nd of June.
He said: “It has come to our notice that the Governor of Edo State, Mr. Godwin Obaseki, has concluded plan to scuttle the primary election of the All Progressives Congress scheduled to hold on 22, June 2020. The pretext is that if held, the primary election will escalate cases of COVID-19 infections in Edo state.”
“The irrefutable information is that the Governor has directed that medical tests be carried out on fictitious persons of up to 300,000 [three hundred thousand]. The plan is to deliberately increase the number of persons declared to be infected with COVID-19 as justification to lock down Edo State throughout the period scheduled for the primary election in the state.”
The party condemned the governor’s actions as a show of desperation and called on INEC, NCDC, Police, DSS and other security forces to refrain from succumbing to his desperate antics at scuttling the scheduled primary election.
“Since the first [index] case of COVID-19 was announced by Edo State Government on 23 March, 2020, the state has not carried out more than 238 tests. From the official record of the NCDC, as of Thursday May 21, 2020, a total of 238 persons have been tested for COVID-19 in the entire Edo State. Of this number, 119 are confirmed, 78 are on admission, 35 have been discharged and 6 have died.”
Furthermore, the party emphasized that “with the President’s COVID-19 Regulations made on 30 March, 2020; 13 April, 2020; and 27 April, 2020 being in place, the authority of Governor Godwin Obaseki to make Regulations to tackled the COVID-19 pandemic in Edo state is legally exhausted. It must be further noted that the President’s Regulations are made pursuant to the powers conferred on him by the Quarantine Act, a statute of the federal government made under item 54 of the Executive Legislative List in the 1999 constitution. In none of the extant Regulations made by the President is Edo State listed for lockdown.”
“In view of the foregoing, any decision of Governor Godwin Obaseki to lockdown Edo State should be considered in serious conflict with the President’s Regulations. We therefore urge the Hon. Attorney General and Minister of Justice of the Federation to take proper note of these developments and protect our hard-earned constitutional democracy from being undermined by Mr. Godwin Obaseki.”
The party pointed out the termination of Obaseki’s four-year tenure on the 11th of November, 2020, and cited aspects of the constitution and the Electoral Act that mandates the conduct of a general election preceded by party primary to elect another governor of the state.
Please follow and like us:

Olawepo-Hashim calls on political leaders to unite to save Nigeria